Ever since I started cooking, I’ve been looking for a good solution to storing spices. In my first real kitchen (second apartment, but first with a truly functional kitchen), I wanted a spice rack that showed off the colors of the spices in their jars. Before you say anything, I know that spices should not be exposed to light. Ideally, I’d want them in a very narrow built-in cabinet, like the ones with foldable ironing boards in old homes (for those of you who don’t know what I’m talking about, check out this link). I did have such a board, but I was using it, so the space was off-limits to spices. I like the colors of spices and want to look at pretty things, and it’s my kitchen, so there. But I couldn’t find anything: most racks were revolving stands that showed just the cap of the spice jars, or they came with jars that were too small, or the space for jars was insufficient (if you’re only using a dozen spices, then you don’t need a rack in the first place, sorry). I ended up building my own spice rack, with plywood that I had precut and then painted white. At the time, I had 24 spice jars, and left room to grow in that rack to 30 jars.

By the time I was in my more permanent apartment (the one in which I lived when I met the Engineer, started this blog, and where we will be summering), that spice rack was overflowing. I had a spice basket next to it, and more spices in the pantry and on the countertop, all in different containers (plastic bags, plastic boxes, tins, glass jars from several different brands, etc.). Once again, I had an old foldable ironing board. I didn’t use that one, but I had put a bookcase in front of it, so once again it wasn’t a good space for the spices. I might remedy that next summer by rearranging the furniture in that apartment (since there’s a lot less of it now), but I just lived with it until we moved. 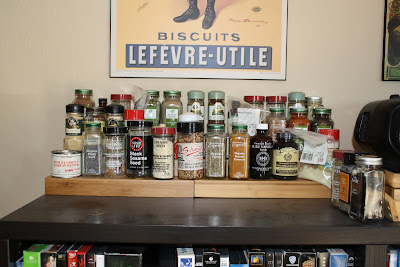 Now that we’re settled in our house and that we’ve got the pantry in order, it was time to store those spices properly. I looked through the webpages I had bookmarked over the years (as this was by no means a spur-of-the-moment decision). There was The Traveler’s Lunchbox, whose author stored her spices in little metal tins in an old typesetter’s tray. That is absolutely beautiful, and I even had some of those tins. But they’re too small to hold the contents of most store-bought spice jars, and I don’t want to end up with a “presentation” spice rack and another leftover stash that holds the other half of spices, so I had to rule that out. That, as well as price, is why I didn’t go the whole tin-on-a-magnetic-board route. And I didn’t have the wall space to make racks again, despite nice tutorials like this.

I thought of a hanging rack for the inside of the pantry door (or I could have mounted one), but again I didn’t find anything that seemed like it would hold all of the spices. I’m keeping in mind, of course, the fact that we haven’t quite rebuilt our spice collection since we moved: we now have 30 spices, plus bay leaves, salts and extracts, but I know we’ll be buying more. We did get bleacher stands, which were put in an accessible space, but they looked completely mismatched, and labels were sometimes hard to read on the top tiers. Many people put their spices in a drawer with labels on top of the jars, but you can’t see the spices as much – and we certainly don’t have a drawer for that. Besides, I wanted to keep the bleacher stands.

It was when I saw this picture, however, that I was convinced of the necessity of matching containers. But not like the ones shown, because most spice jars on the market have an opening too narrow to insert measuring spoons (I even had a commercial jar too narrow for the ¼ tsp, which is tiny!). It’s fine if all I need is a sprinkle or a pinch, but most times, I want something more substantial. Pouring the contents of a spice jar into a measuring spoon never ends well. So I needed something with a wide mouth and, as stated before, something big enough to hold the contents of most commercial jars. The latter is the main reason why I didn’t pounce on the SpiceCare system when I saw it profiled on The Kitchn over a year ago. It’s beautiful and looks quite practical – as long as you have a lot of spices that fit in 2-oz containers. (You can always deviate from the sets and buy medium or large jars individually, but the cost really adds up, which is the other reason I didn’t go this route.) Most online round-ups I found on the subject had the usual advice, but nothing new or specific enough for my needs.

The author of Smitten Kitchen once wrote a post on the subject; while I love her spice jars, I think that the potential mess when uncapping them would get to me. I finally had my answer after a really great post on Tea & Cookies about how the author organized her spice collection. The jars she used were actually not designed for spices, which is probably why I had never come across them before. They’re from the Sunburst Bottle Company, and at $18.75 for a case of 24 4-oz glass bottles with black caps, they are by far the most reasonably priced! I got enough to fit all of our spices, and we still have extra jars to expand our collection. The bleacher stands expand as well, so that shouldn’t be a problem. 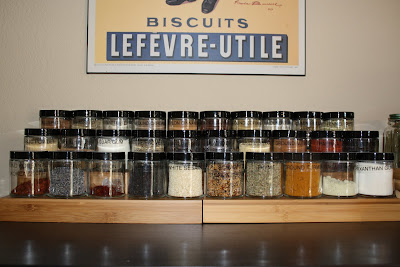 You’ll notice that all the jars are short enough that they don’t hide the ones on the rear shelves. The mouth of each jar is wide enough for a tablespoon to be levelled without spilling anything. Everything looks perfectly uniform, and looking at them makes me deliriously happy. Off to the side are the bay leaves (too big for the jars), the vanilla extract and vanilla bean paste, as well as the almond extract and coconut extract. 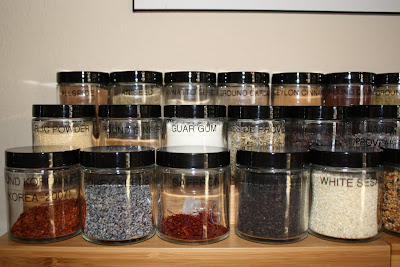 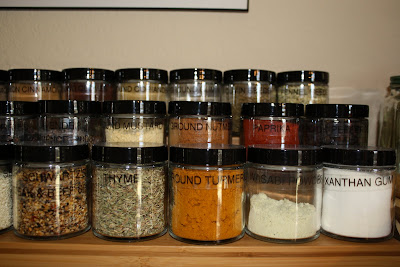 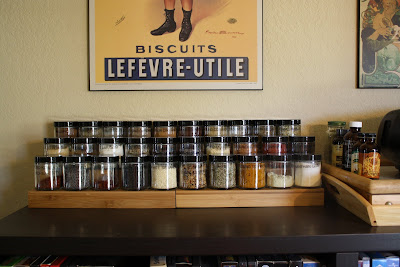 Oh, Amélie--they look gorgeous!
So happy to connect you with the right jars. I searched a long time for those. They make me happy too.
Thanks for alerting me to your post. I wouldn't have wanted to miss it!