No, not in the photography sense. In the Texas sense. It’s not really that the engineer and I want to be assimilated, but we did want to have some first-hand experience with actual firearms, given the local gun culture. People often think that gun owners live in bad neighbourhoods and feel that they need the gun to defend themselves. I couldn’t know what the statistics are for actual gun ownership, since some gun owners do not have the proper licenses, but it is interesting to note that in our neck of the woods, north of San Antonio, there are a lot of gun permits, despite the low crime rate. It turns out that gun permits are tied to wealth and politics, so apparently the well-off Republicans in our sector like their guns.

Before last week, the only firearm I’d ever held was an antique hunting rifle belonging to my late grandfather – it wasn’t loaded, of course. So the Engineer and I enlisted one of his colleagues who is quite knowledgeable about guns to give us a shooting lesson. We used the good old barter system and traded his expertise for some apple turnovers and chocolate chip cookies (recipe to follow). We were given some basic safety rules and, over the course of about two hours, got to shoot a .22 caliber revolver, a .38 Colt, a .32 pistol and a Glock 19. While the semi-automatic Glock made me feel like I was in the middle of an action movie, both with the way it is loaded as well as the way it feels and looks when you shoot it, I have to say I was more at ease with the .32 caliber pistol. It was lighter, easy to handle, the polymer structure absorbed some of the recoil, and I was a better shot with it.

I have to say that I still don’t quite understand the gun culture here, and I still don’t feel the need to own a firearm, for protection or otherwise. That being said, I’m very happy that I got to handle different types of handguns, so that I actually physically know what I am talking about. I would consider going shooting again, to practise my aim, but I really don’t see myself making this an important hobby. There’s something a little scary about how much fun it can be to use something with the potential to be so dangerous. 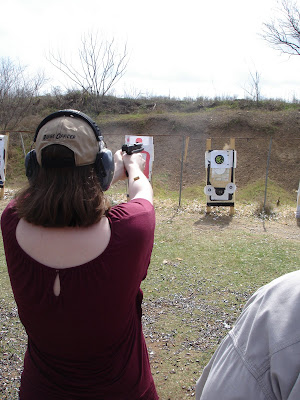 Are you allowed back in Canada now?
The guns I can almost understand, but if you start extolling the virtues of country music, line dancing, and you only wear cowboy hats, I think immigration may turn you away at the border. Or send you to Calgary!

Robert, you forget that Quebec actually does have country music, line dancing and cowboy gear - they may not have made their way to Anglophone Montreal, and it's not as omnipresent as in Calgary during the Stampede, but I assure you it's happening in your own province! ;)

Oh no!
Do I have to move to Ontario now?

You're moving to Boston, I think that's far enough.