Pear Crostata with Figs and Honey 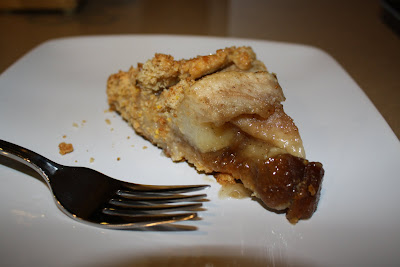 I made this crostata (basically a rustic tart) from a recipe I found in Bon Appétit. I wanted to use up some of the dried figs we had. The recipe calls for dried Calimyrna figs, though I’m pretty sure nothing horrible would happen if you were to use Mission figs (we had both on hand). The problem with this recipe is that it should have specified to use very fine cornmeal in the crust. We used medium-grind cornmeal, and it stayed too hard once the crostata was baked – it felt a bit like eating something with very fine gravel through it. This was less of a problem as time went on, because the moisture from the contents of the crostata softened the cornmeal after a day or two. The taste was great, though, and all the flavours went well together. There’s not much sugar in this dessert, so it’s relatively healthy. I served it both on its own and with some plain frozen yogurt sweetened with honey. 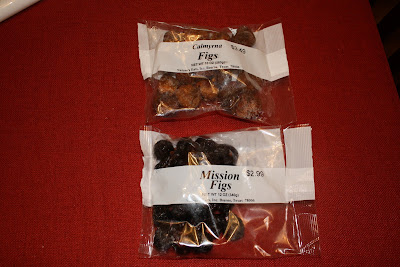 For the filling
Position rack in center of oven; preheat to 400 °F. Whisk first 6 ingredients in large bowl. Add pears and figs; toss gently. Roll dough out on lightly floured parchment to 14-inch square or round. Transfer parchment with rolled-out crust to rimless baking sheet. Mound pear mixture with juices in center of crust, leaving 2- to 3-inch plain dough border. Using parchment as aid, fold dough up over edges of pear mixture, pleating edges and pinching to seal any cracks in dough, forming square or round. Brush crust edges with milk; sprinkle generously with raw sugar. 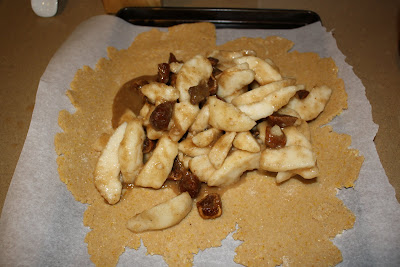 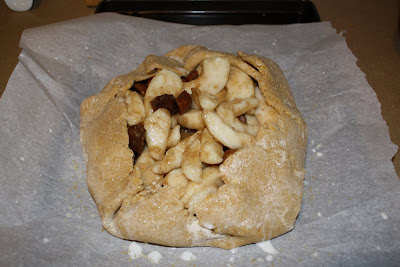 Bake crostata until crust is golden, pears are tender, and juices are bubbling thickly, covering crust edges with foil if browning too quickly, 50 to 60 minutes. Remove crostata from oven; drizzle 2 Tbsp honey over hot filling. Run long thin knife or spatula around edges of warm crostata to loosen. Cool crostata on parchment on baking sheet until slightly warm, at least 1 hour. Transfer to platter. Serve slightly warm or at room temperature. 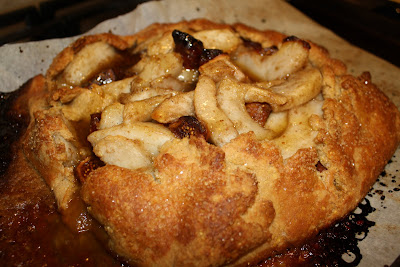 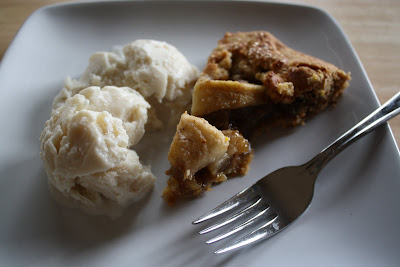