I finished emptying the pantry and freezer as best I could before leaving the house for the summer. I had a jar of poppy seed cake and pastry filling, but no hamantaschen recipe that called for it, so I made a poppy seed cake instead. And if, like me, you’ve been making breakfast pizzas and still have some hash browns in the freezer, you might appreciate this bacon, potato, egg, and cheese breakfast casserole, even for dinner! I used up all my orange vegetable purée in muffins and winter squash pancakes with crispy sage and brown butter. A can of red kidney beans and half a bag of elbow macaroni became a delicious, retro dish of chili mac, with evaporated soy milk and extra-sharp cheddar to make it lactose-free. (I also threw in some halved cherry tomatoes from the back of the fridge, and only added the beans at the end of cooking.) But I still had some beet purée in the freezer, and since the Engineer said I couldn’t make chocolate beet cakes anymore, I decided to go with beet strawberry chia pudding for breakfast.

It has a *gorgeous* color and was surprisingly good! I think it would work well with raspberries or blueberries, too. I didn’t have a lot of toppings around, so I threw in some pepitas for color, but I ended up not really liking the addition. I think coconut flakes would be a much better choice.

Put the chia seeds in a medium bowl.

Slowly pour the liquid mixture into the bowl with the chia seeds while stirring. Stir until thoroughly mixed. Place in the fridge and let it sit overnight, or at least 4-5 hours.

When ready to eat, stir in maple syrup; top with desired toppings such as strawberries, flaxseeds, coconut, or granola. 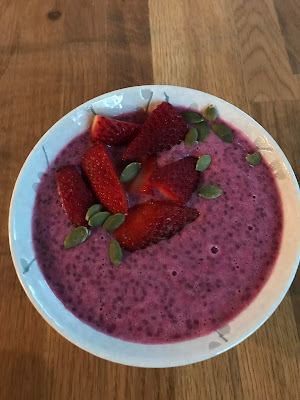 Posted by Amélie at 1:08 PM No comments: 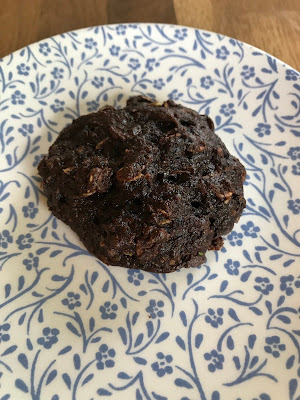 These are the type of hearty, healthful cookies you can eat for breakfast, though of course they make a fine dessert or snack too! I also didn’t feel guilty giving them to the Fox even though he’s still a baby. They contain white whole wheat flour, whole grain oats, Greek yogurt, and dark chocolate, in addition to the zucchini. They are very moist and will keep at room temperature in an airtight container for a few days, though they freeze well too. The yield is 24 cookies.

Arrange 2 racks to divide the oven into thirds and heat to 350 °F. Line 2 baking sheets with parchment paper or a silpat; set aside.

Whisk the flour, oats, cocoa powder, baking soda, and salt together in a medium bowl.

Squeeze the shredded zucchini in a paper towel and pat dry to remove excess moisture. Place the zucchini, brown sugar, granulated sugar, yogurt, egg, and vanilla in a large bowl and mix well to combine.

Add the flour mixture to the large bowl and stir until just combined. Stir in the chocolate.

Drop heaping tablespoons of the batter onto the prepared baking sheets, spacing them 2 inches apart, 12 per baking sheet.

Bake, rotating the baking sheets between racks and from front to back halfway through, until the edges are set and the middle is still slightly soft, 12 to 15 minutes total. Let the cookies cool for 5 minutes on the baking sheets, then transfer them to cooling racks to cool completely. 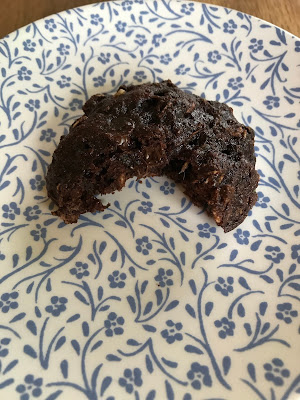 Posted by Amélie at 1:48 PM No comments: 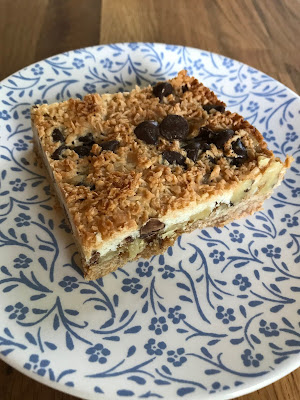 What do you do if you bought sweetened condensed coconut milk at the store because you were just so happy to see it existed, but didn’t have any recipes in mind, and the expiration date is nearing? You look up recipes on the company’s website and make 5-layer cookie bars, that’s what! This recipe is incredibly easy, yet it turned out much better than I thought it would. I don’t usually put chopped nuts in desserts, but I happened to have walnuts to use up and here they work well; I’m sure you could use whatever kind of nut you like, and you could probably omit them too. I loved that this version of the recipe isn’t as sweet as most!

I had to use more coconut oil than called for, because I could tell the consistency of the crust wasn’t quite right. I think I used 4 Tbsp. total, but I couldn’t tell you for a fact. When processed with the oil, the crumbs need to look like wet sand, so that they will form a solid mass when pressed in the bottom of the pan and baked. When in doubt, it’s better to have a bit too much coconut oil here rather than not quite enough (in the latter case, the crust would fall apart).

In the bowl of a food processor (or by hand), drizzle coconut oil into the crushed graham crackers until they hold together. Using the bottom of a dry measuring cup or a glass, firmly press the mixture onto the parchment paper until it holds together (this is critical, otherwise the cookies will fall apart after baking).

Drizzle the sweetened condensed milk over the top of the cookie mixture.

Bake for 30 minutes, until lightly browned around the edges. Remove from oven and let cool for about 2 hours. The cookies can be stored at room temperature, but I found that they were easier to cut and held together better when stored in the refrigerator (that being said, some people prefer them gooey, so they could be briefly heated in the microwave and perhaps served on a plate with a fork, rather than eaten like a cookie). 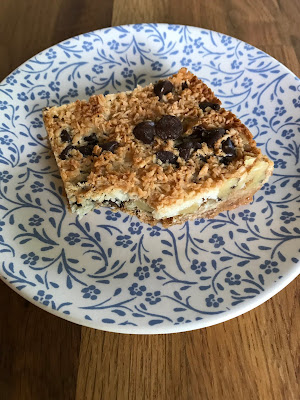 Posted by Amélie at 8:09 PM No comments: