I thought that Smarties weren’t available in the States unless it was through a specialized importer, but it turns out our HEB has small boxes of them. Maybe I shouldn’t be surprised, as this chain is leaps and bounds better than the grocery store chains I’ve seen in Canada, but still, it was a nice surprise. I grew up with Smarties; I remember when they still had a light brown and a dark brown, which dates me somewhat. I’m now unbelievably pleased that they are using natural food dyes to get their colors. 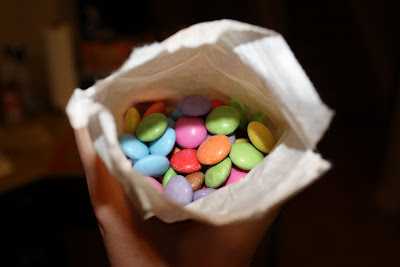 As you can see by the picture, it is definitely possible to get bright, eye-popping colors in candy without resorting to artificial means and without altering the taste (the orange Smarties still taste like orange, but that was true before and might be due to the chocolate rather than the color). There are spices, of course, that are great to add color (and if one waits until the spices are stale, the taste shouldn’t change much). The blue is usually the difficult one to achieve (Canadians might remember the years without blue Smarties while the natural dyes were in development), but Smarties has done it with cyanobacterium spirulina! They are also using hibiscus fruit, red cabbage, safflower, black carrot, radish and lemon. Now, I’m not saying you should gorge yourself on the stuff, but by golly, it definitely sounds healthier than most candy-coated chocolate out there! I only had the one package, but it was delicious and made me relive part of my childhood. I applaud Smarties’ initiative to use natural food dyes, and I wish more companies would do the same. Have fun rediscovering them!
Posted by Amélie at 10:29 AM

While I'm not one to be afraid of being unable to identify what I'm eating, I do find it fun to see recognizable things used to color a product. Lemon-yellow ftw!