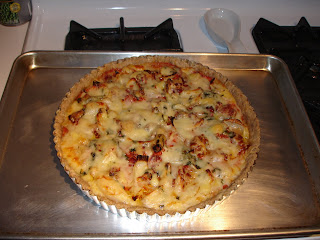 As you might guess, I have a long list of bookmarked websites with recipes that I want to try (along with a small pile of paper recipes in my kitchen). I was pretty proud of myself here, because I managed to combine three of them in this one dish. I used Clotilde Dusoulier’s Easy Olive Oil Tart Crust and David Lebovitz’z Aïoli as a base for a roasted tomato and onion tart. The tart called for garlic and mayonnaise, which I replaced with just aïoli.

I should mention first that I made the aïoli in the food processor. It may not be authentic, but it’s damn easy. Also, please take the instructions seriously when they say to start with only half of the garlic you have crushed. I decided to use all of it at once, since I like garlic and it didn’t seem like much. What could happen, right? Well, it was the most potent aïoli ever. Like, nuclear garlic flavour. So I ended up being stingy with it in the tart – and wouldn’t you know it, the taste was almost lost in it. The same later happened with some aïoli I had put in a ham-cheese-alfalfa, it really didn’t taste as strongly once it was mixed with other things.

Also, I did find that the tomatoes were a little watery in the tart. It’s possible that I should have let them roast longer, or maybe extra aïoli (substituting for the mayonnaise in the original recipe) would have helped. In fact, that may be why the recipe called for what seemed like an obscene amount of mayonnaise (2/3 cup). I’ll write a lesser amount in the recipe, but know that you should probably use more than I did in the pictures.

Grease the tart pan lightly if it doesn't have a nonstick coating.
Combine the flour, salt, and herbs in a medium mixing bowl. Add the oil and mix it in with a fork. Add the water, mix with the fork until it is absorbed, then knead lightly until the dough comes together into a ball.
Turn the dough out on a lightly floured work surface. Sprinkle a little flour on the ball of dough and on the rolling pin, and roll the dough out into a circle large enough to fit your tart pan.
Transfer the dough carefully into the prepared pan and line it neatly. Place the pan in the fridge for 30 minutes to rest.

Crush the garlic cloves with the salt in a mortar or deep bowl until you have a smooth paste. Take out some of it as it may be too much; you can add it back later.
Put the remaining paste in the food processor along with the egg yolk and process.
Add the oil to the egg and garlic mixture starting very slowly, drop by drop. You can use a spout in an olive oil bottle to regulate the flow, but you can also drip the oil in from a spoon. As the mayonnaise thickens, continue to add the oil in a very thin stream. Continue until all the oil has been incorporated. (If it gets too thick you can dilute it slightly with a tablespoon of warm water - don't add more oil, it will just get thicker.)
Taste, and add more of the garlic, if desired. 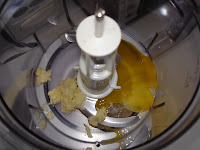 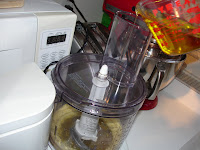 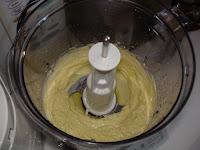 Preheat oven to 400 °F. Line a large baking sheet with parchment paper. Core tomatoes, then slice them into ½-inch thick slices and lay them on the baking sheet. Thinly slice the onion and lay it on the other half of the baking sheet. Drizzle the oil evenly on top of the onion and tomatoes, baking them until wilted and slightly browned. This takes about 30 minutes. Set aside.
Cook your bacon, removing when crisp. Dry on paper towels and break up into 1-inch pieces. 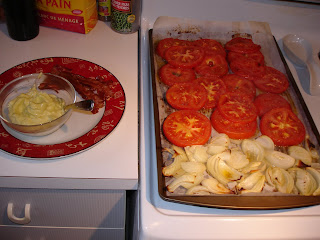 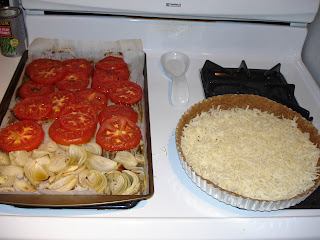 Sprinkle the cheddar cheese on the tart shell. Layer tomatoes, overlapping them on top, and then scatter the onion on the tomatoes. Sprinkle the garlic on top, if using, along with the bacon bits. Sprinkle the basil on top. 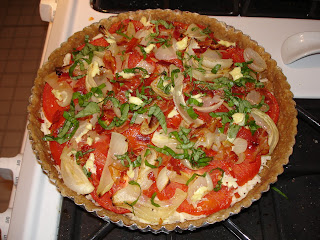 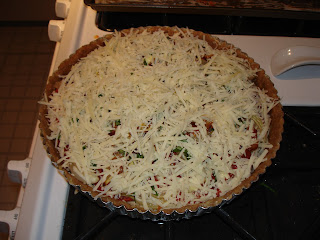 Whip the mayonnaise or aïoli until light and spreadable. Place dollops evenly on the tart and spread to cover. Sprinkle the gruyere on top of the mayonnaise and bake in a 400 °F oven for 25 to 30 minutes or until the top is a golden brown. Let cool for about 10 minutes, remove the ring and serve. 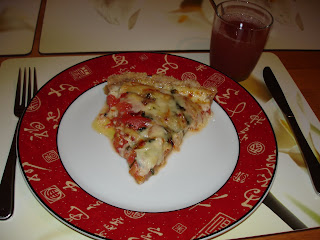