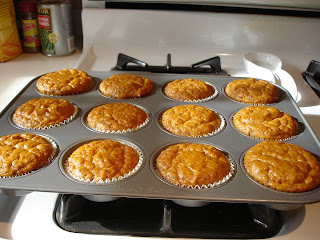 You may remember the impossible pie (or tart) concept from my coconut version. They are so-called because it seems impossible to get something solid with those ingredients. The flour falls to the bottom and creates a crust, while the eggs keep the center gooey.

The problem with this recipe is that it was presented in the form of cupcakes, but they were nearly impossible to get out of paper liners (I’m not sure it would have been much prettier with silicone liners either). So I suggest using six greased ramekins and upping the cooking time a bit. Of course, I did make a substitution so that I could have a lactose-free version of half-and-half, but I don’t think the problem was entirely attributable to that. I think impossible pies are just not meant to be unmolded, that’s all.

After reading this website, I recommend melting 1 Tbsp butter or lactose-free margarine in a cup, then adding whole (lactose-free) milk until you have ¾ cup total, to substitute for the half-and-half. And I used my nifty digital scale to weigh 15 oz of pumpkin purée, which almost finished the can I had opened for the pumpkin chocolate chip cookies.

Also, for the pumpkin spice: the “official” recipe is to mix ¼ cup ground cinnamon + 2 Tbsp ground ginger + 2 tsp ground cloves + 1 tsp ground nutmeg + ½ tsp ground cardamom, if you wish. But that makes enough spice to store, more than you need for the recipe. Also, the cinnamon ratio is much too high for me (I like cinnamon, but not THAT much). So I added these spices in various ratios to total 2 tsp; you can do it to taste. 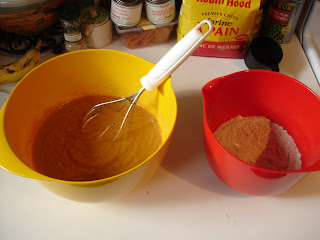 Add in dry ingredients and whisk until no streaks of flour remain and batter is smooth.
Fill each ramekin with approximately 2/3 cup of batter. 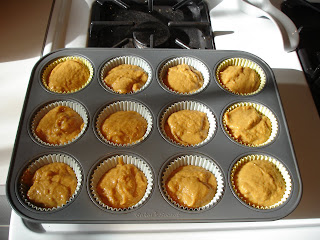 Bake for 25-30 minutes. The pies will sink as they cool. Serve at room temperature or chilled, topped with lightly sweetened whipped cream or a lactose-free equivalent if you wish. 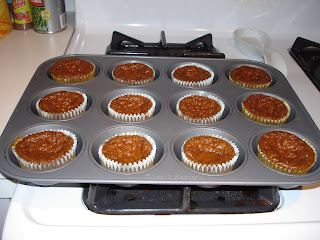