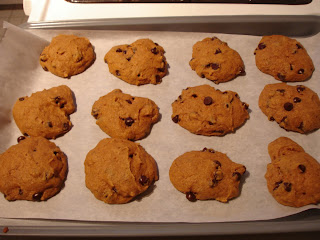 Fall is pumpkin season. And I just love pumpkin desserts! Well, pumpkin soup and pumpkin seeds are good too, but desserts are my favourite. I’ve added two new recipes to my arsenal recently, so I’ll share them here.

This cookie recipe was really good, though I have to say that I felt like they were lacking in... “heat”. Maybe it’s because of the ginger and spices that I’ve come to associate with pumpkin desserts and that are absent from this recipe. The cookies were wonderfully chewy, though, and the chocolate was a great touch (though not quite enough to satisfy a chocolate craving if you have one – it’s a supporting player here). Next time I make those, I’ll add powdered ginger (which goes well with dark chocolate), and maybe ground cloves or nutmeg. It’s up to you whether or not you want to spice them up.

Also, on the subject of pumpkin purée... I use canned purée. Sure, you can make your own with a real pumpkin, by roasting the flesh and processing the heck out of it. I’ve done it once. Once. Now, I stick to unsweetened canned pumpkin purée, such as Libby’s – with only pumpkin as an ingredient, what’s not to love? It’s so much easier that making your own purée, and you can stockpile it to use in seasons other than fall.

Preheat oven at 350 °F. Line two baking sheets with parchment paper or grease them.
Combine pumpkin, sugar, vegetable oil, and egg.
In a separate bowl, stir together flour, baking powder, ground cinnamon, and salt.
Dissolve the baking soda with the milk and stir in. 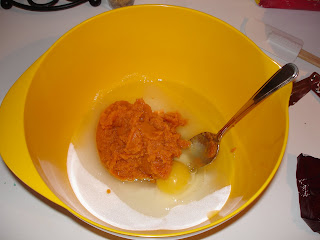 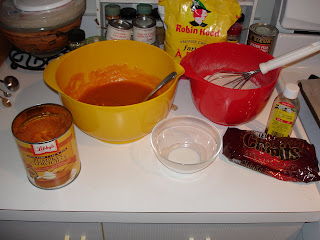 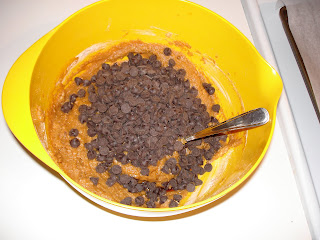 Drop by spoonful on the baking sheets and bake for approximately 10-15 minutes or until lightly brown and firm. (Go by the look of the cookies rather than the baking time.) 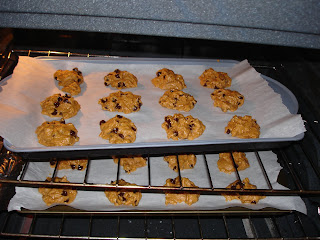