I got this recipe from David Lebovitz’s blog. I really liked it, because it is very simple to make, but also very good. (That being said, I realize only now, as I look at the recipe again, that I messed up: I added the beaten egg to the flour mixture and poured the whole thing over the scallions, instead of adding the egg to the scallions after the flour. Honestly, it’s good both ways!) We served it with a carrot-ginger sauce.

I couldn’t find strips of dried Korean peppers anywhere, but at Aubut, I found some ground Korean pepper, though, from the Épices de cru brand (more on that in a later post). And I think I fell in love with it. You see, I don’t like spicy foods, but this pepper has more of a sweet heat than a spicy one. I’ve used it in a few other dishes since then, and I love its subtle (read non-aggressive) taste.

Stir together the flour, water and salt until just mixed.

Chop the green parts of the scallions into 3-inch lengths. Reserve the white parts for another use.

Heat a thin layer of vegetable oil in a 9- or 10-inch skillet, preferably non-stick, until hot. Fry the scallions until they're completely cooked through and soft. Add a touch of soy sauce to the pan when they're almost done, to season the scallions. 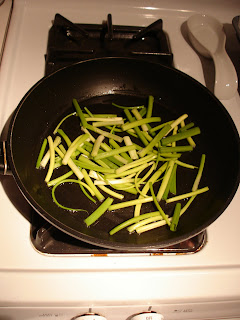 If using other ingredients, any vegetables, kimchi, prawns or whatever, add them now, then toss a few times to heat them through.

Pour the pancake batter over the scallions (and other stuff) in the pan, spreading the batter, and cook a few minutes until the bottom is nice and brown underneath. Lift the edge to peek.

Pour the beaten egg on top then swirl the pan to even out the egg a bit, still keeping it pretty uneven. Distribute the dried pepper over the egg and cook until the egg is just beginning to firm near the edges.

Using a wide spatula, flip the pancake and cook for another minute or two until the egg is set and preferably crispy at the edges.

Slide pancake onto a cutting board, then let cool a bit. Cut into wedges and serve with dipping sauce of your choice. 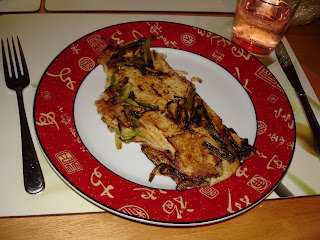 Those look absolutely awesome and combine many ingredients I like. I'll try to convince the wife to try it next week for supper.
Do you know what type of pepper is in the Korean pepper?
Is there just the sweet flavour or is there some smokiness also? I may try to substitute ancho instead (slightly sweet, smoky, but spicy).

I have to admit I have no idea what type of pepper is in ground Korean pepper. There is a bit of smokiness, but sweet heat is what really stands out for me. Ancho would probably be a good substitute. But if you like spicy, then by all means, go for it! This dish can also be served with hot sauce.

We ended up making these last night.
They were quite excellent! I did use ancho in the end and it worked quite well. I love green onions, so it was nice to find a recipe that really highlighted them like this.
Thanks!