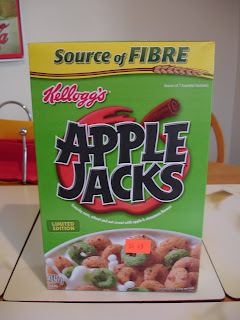 The Engineer made a quick trip to our corner store last night to get some drinks and some cereal, while I was making dinner. He came back and, when he showed me the box of cereals he got, my face lit up like a Christmas tree. Apple Jacks! These used to be one of my favourite cereals, and I can’t tell you how often I’ve craved them recently – you see, they were discontinued by Kellogg’s for some reason and are now only sold at special fairs. Well, as you can see on the box, these are a limited edition, but the point is: they are now in stores. Go get yours!

I have to admit that I was a bit disappointed this morning, though, because they don’t taste quite like they used to. Has anyone else tried this batch? What do you think? I know the greens O’s aren't classic, but they taste the same as the orange ones, and I remember them from the 1990’s. And if you’re some of those “weirdos” from my generation who haven’t heard of these cereals, go buy some. Now! 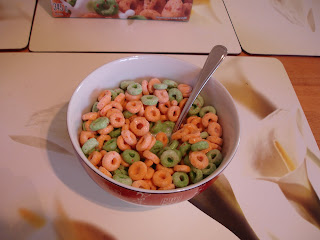 If you ever want, the IGA at Cavendish mall has a wide variety of imported American cereals, including a steady supply of Apple Jacks, Cookie Crisp, and more. Unfortunately, they're about $6-7 per box.

How is it that even the Schmall has better food choices than our grocery store?!