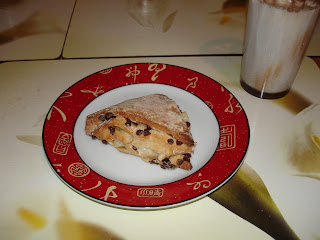 Last time I was at Jean Talon market, I ended up buying some Bartlett pears, because I tasted a slice and they were delicious; I just couldn’t pass them up. And shortly before then, I had found this recipe for pear and chocolate scones that I just had to try. They’re unusual in that the filling is wrapped inside the dough rather than mixed into it. The original recipe was vegan; I used dairy but made it lactose-free, though you could of course replace the margarine with actual butter. I used these teeny, tiny chocolate chips that I bought with another recipe in mind. While they’ll be perfect for the other recipe, I recommend you stick to the regular-sized chips here, which won’t fall out of the scones as much when you make them (and measuring them will also be more accurate). 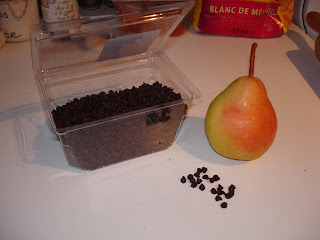 I have to say that as I was mixing the dough and then kneading it, it was just about the worst experience of my life. (Well, only as far as dough is concerned, but still.) It was sticking everywhere, and I just kept throwing flour at it in an effort to tame it. That’s why there are no pictures; I was in no condition to touch anything. Finally, I had enough and I decided to just try to roll it out already and get it over with. And you know what? Suddenly, it was THE most cooperative dough EVER. It stretched out exactly where I wanted it to, it did everything exactly like it should, it didn’t even stick to the floured rolling pin. Go figure.

Despite this weird experience with the dough, making these scones was totally worth it! I’m keeping this recipe for future reference for brunches.

Grate the frozen margarine on a plate and return it to the freezer until you need it.

In a bowl, whisk together the flour, sugar, baking powder and salt.
Gently and quickly, with your fingers, mix in the grated frozen butter substitute.
Mix in the milk.

On a floured work surface, knead the dough 8 times.
With a floured rolling pin, roll the dough out to a 12 inch square.
Fold the dough in thirds (like a letter) and then fold it in thirds in the other direction.
Wrap the dough in plastic wrap and freeze for 5 minutes (or refrigerate overnight). 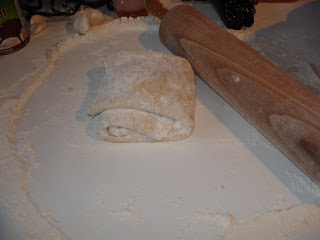 Peel, core and chop a pear into small chunks.

Roll the dough out to a twelve inch square again.
Top with pear and chocolate chips. 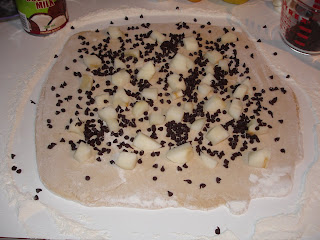 Roll the dough up into a log and cut into four equal pieces. Cut each piece diagonally. 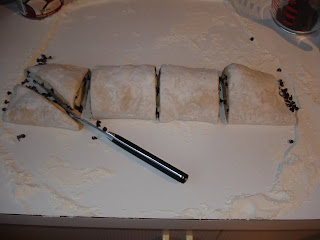 Transfer scones on to a baking sheet and brush the tops with melted butter (or substitute). 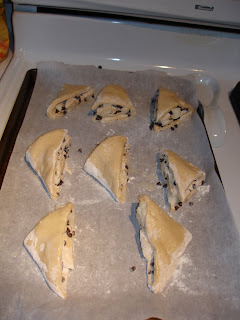 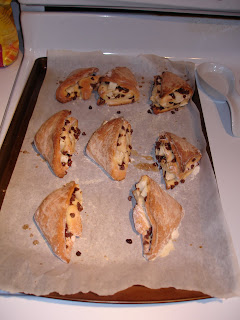 I've been curious: what do you guys do with all the leftovers?

When we're lucky, we share them with other people. In this case, though, eight little scones: one each for breakfast and one each for dessert at lunch, so they lasted two days with just the two of us. when I bake, I'm also now limiting cookies to 24 and cupcakes to 12 when there is no sharing.

I don't much talk about it, but I've gained quite a bit of weight since I got married. And I have a sneaking suspicion this blog might have something to do with it (even though statistically, women gain weight in the year following their wedding - and then again once they are homeowners, so I've got that to look forward to).

On the plus side, Dear Sister is switching careers to be a real estate agent, so guess who will be unloading baked goods at her open houses! :)

Really? Weight gain after buying a house? Does that apply to men also, because J lost weight in the past year and it seems like I've put it on...
Good plan for the open houses! I guess this is the same problem that the Toronto Lawyer also has with his cakes.