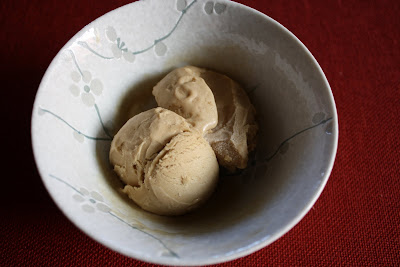 This recipe is from The Vegan Scoop, which is full of awesome recipes for frozen desserts (I’ve barely scratched the surface). I really liked this ice cream, though after a few bites, I found it a bit one-dimensional. Maybe I’ll try mixing it with another flavour (the book suggests jelly, banana, brownies, flaxseed and even cucumber as possibilities!). I actually did serve it with a homemade strawberry sauce once, but the little angel on my right shoulder made me resist topping it with melted Nutella.

In a medium-size saucepan, combine soymilk, peanut butter, and brown sugar. Bring to a boil, then remove from heat. Add vanilla extract.

Refrigerate until mixture is chilled, approximately 2 to 3 hours. Freeze according to your ice cream maker’s instructions.