It’s been a while since I posted a breakfast recipe. It’s not that I hadn’t made anything lately, though. There was a banana date bread that was okay, but not better than any other banana bread I’ve shared before. I also tried two new pancakes recipes: one called for separating an egg, but not whisking the white separately (this was not a flaw, but a feature of the recipe); the other called for a whopping 4 Tbsp of baking powder, to make supposedly the fluffier pancakes ever. The former was nothing special, but the latter was a complete flop.

Then I started to go through the pantry to edit its contents, and decided to use up a big can of pumpkin purée. So I pulled up this link to get some inspiration, and settled on these pumpkin spice waffles, though I didn’t bother with the maple pecan syrup. They were delicious both with plain maple syrup and with ginger syrup. And these waffles, ladies and gentlemen, are worth sharing.

Grease the waffle iron and cook the batter in the waffle iron as recommended in the manufacturer's instructions. (I like using a relatively natural spray for this, and I greased the waffle iron after every other waffle.) Repeat with remaining batter. (I got 10 waffles, using about ¼ cup of batter at a time, so I froze some of them for future breakfasts.) 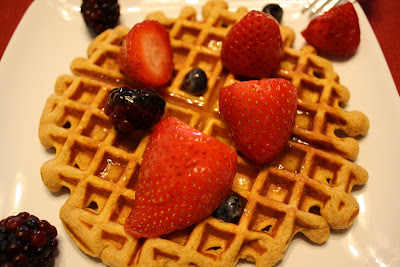