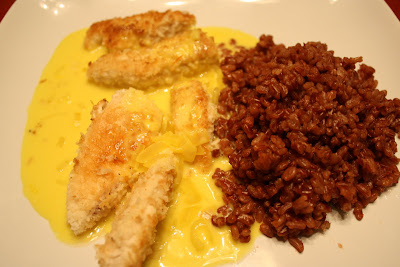 A while back, I had seen a tip on The Kitchn for cooking moist chicken breasts every time: you pan-cook them on one side so that they’re golden (not browned or seared), then you cover the pan, turn the heat to low and walk away for 10 minutes, at which point you turn off the heat and leave the chicken to rest another 10 minutes. I had bookmarked it for reference, but never really got around to using it. But then I saw this recipe on Not Martha for double coconut chicken breasts cooked using that method, and I just had to make them. They’re relatively easy to make, and with a side of rice, the meal prep is perfectly timed. I used red rice for a little color, and I really liked it, but any type of rice will do. I cut my chicken breasts into strips, for more even cooking and also for better portion control. The saffron gives the most beautiful color to the sauce, the coconut adds crunch, and the resulting dish is oh so pretty! The flavours of saffron and coconut also complement each other well and made this dish finger-licking good, eliciting oohs and aahs from the Engineer and me. I’ll definitely be making this one again!

1 can of coconut milk (or 1 cup, but then you’d be stuck with leftovers)
a few strands of saffron (or ½ tsp ground turmeric is acceptable)
about 1 ½ cups dried unsweetened coconut (I used fine macaroon coconut; otherwise, whirl it in the food processor a bit)
2 (or 4) boneless, skinless chicken breasts (cut into strips if you want)
1 Tbsp minced shallot
minced parsley for garnish (optional)
vegetable oil, salt and pepper

If you’re serving this with rice, start cooking it now. The chicken takes 20 minutes.

Warm the coconut milk and stir in the saffron. Turn off the heat and let it cool. After a while the sauce turns a pretty yellow color.

Put the coconut on a plate, ready for dredging.

Heat oil (or a combination of oil and butter, if you want) in a skillet over medium heat. Dredge the chicken breasts in the coconut and place in the skillet. Sprinkle with salt and pepper. Just let them get golden brown on both sides and then quickly cover the pan with a heavy lid and turn the heat to low. Let cook on low for 10 minutes.

While you’re waiting, right now is a good time to prepare a salad if you want some veggies with the meal.

After 10 minutes, turn off the heat under the chicken while keeping the lid on. Let the chicken sit for another 10 minutes. (If you’re cooking very thick chicken breasts you might consider checking for doneness, if they are still pink inside keep the pan over low heat for the next 10 minutes instead. But that’s why I cut ours into smaller strips.)

Meanwhile, heat some oil in a small pan and cook the minced shallot over medium heat, 3 or 4 minutes, stirring occasionally until it softens. Add the coconut milk mixture, turn the heat up and bring to a boil. Reduce the heat and stir frequently until the sauce has thickened up a bit. Add a pinch of salt.

At this point your chicken breasts, sauce and rice will hopefully be ready all at the same time. Flood the plate with the pretty sauce, garnish with parsley. And you’re done. Bon appétit!