I had mentioned already that I was going to get a juicer, and now it’s done. Before giving you a recipe, let me walk you through my decision process regarding the model I chose, and I’ll tell you what I think now that I have it.

I weighed the pros and cons of centrifugal juicers vs. masticating juicers. Centrifugal juicers first grate the fruit (or vegetable) into a pulp, then use centrifugal force to extract the juice from the pulp. It tends to be faster than a masticating juicer, but doesn’t extract as much juice – and doesn’t do well at all with leafy or grassy vegetables. The juice is also more aerated, which means that it has to be consumed immediately, otherwise it oxidizes and loses its nutritional benefits (plus, the heat destroys some beneficial enzymes in the juice). But centrifugal juicers are also more affordable than masticating ones, which was really the central issue for me.

On The Kitchn, I had read two reviews, for the Breville Juice Fountain Compact, a centrifugal juicer, and the Hurom Slow Juicer, a masticating juicer, along with comments from users (with these brands or others) regarding what they like and dislike about their juicers. I knew that my juicer should have a small footprint, it shouldn’t leave too much moisture in the pulp, and it had to be relatively easy to clean.

While the Hurom Slow Juicer looked like it had it all, it was a big initial investment (about $360). The Hamilton Beach Big Mouth Pro Juice Extractor, though, gives you more bang for your buck ($80), and seems like a good choice for beginners. It was recommended by Bon Appétit and was a Consumer Reports Best Buy. Reviewers call it a workhorse. Since this is my first juicer and I’m not quite sure how much of a commitment I’ll make to it in the long run, and I won’t use it every day even in the short run, I decided to go with the inexpensive version. If I decide that I really like juicing and that I want to keep doing it, I might upgrade to the Hurom eventually, but I feel like the Hamilton Beach Big Mouth Pro Juice Extractor is a good fit for me at this point.

I’ve had it for several months already, and I use it a few times a month. I find that it’s great to make fresh juice you couldn’t get in a grocery store, and also to use up extra fruit you have on hand (apples, plums and cherries? don’t mind if I do!). The model I have doesn’t separate the foam from the juice, and I do have to stir the juice if I leave it unattended too long to get it homogenized again, but those are minor annoyances. It really isn’t hard to clean (though I use a different brush than the one it comes with, mainly because it was white and stained easily). It’s sometimes a little hard to dose quantities if I want to end up with a single serving, but I’m getting the hang of it.

The juice I get with the juicer seems to me more filling than store-bought juice, though not as filling as a smoothie (since I’m not using the pulp with the juicer). I like making some for breakfast and drinking it alongside a bowl of granola or a slice of banana bread. I don’t end up with too much pulp, though if I did, there are always ways to use it in the kitchen! I won’t give too many juice recipes here, because I’m well aware that most people don’t have juicers. There is one that I wanted to share, though, as it’s the first one I made and it was surprisingly good. I found it on The Kind Life. I was afraid it wouldn’t be sweet enough at first, because it only calls for an apple to sweeten it (and I’m not a fan of savoury juices). It was perfect, however, and I’ve made it several times since. All ingredients keep well in the fridge, too, so it’s easy to stock up so you can make this blend whenever you feel like it. The recipe below makes about one serving, though obviously you can alter it to suit your taste.

Carrot-Apple-Lemon-Ginger Cocktail
4 or 5 large carrots
1 large apple (such as Fuji)
½ lemon (peelded, for my juicer)
a 1-inch piece of ginger

Go ahead and juice. Enjoy! 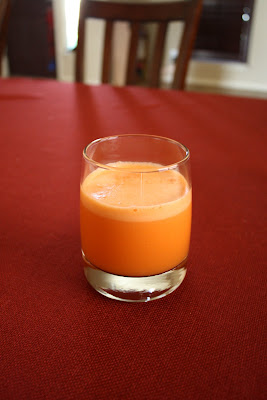 Thanks for sharing
Best Masticating Juicer