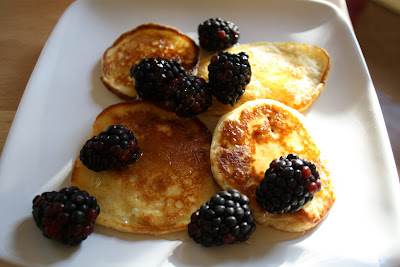 I’ve just realized that I’m about a month late in posting recipes here. I wish I had a really good excuse, but I don’t, so I’ll just try to do some catching up. I’m sure you’ll forgive me, though, once you taste these heavenly hots, the lightest, littlest and most delicious pancake to grace my plate in quite a while. They were the best thing ever, really, and didn’t even need syrup. They are made with very little flour, with a very high ratio of eggs-to-batter, and what makes them special is the sour cream they contain. I didn’t actually get the chance to try the recipe with tofu sour cream or strained lactose-free yogurt, because I ended up making them when the Engineer had left about 1 cup of regular sour cream in the fridge after making his weekly recipe (it’s cakes, now). I took some Lactaid for this, but I think they would work with tofu sour cream and a splash of lemon juice to compensate for the acidity. I made a half batch, so about 16 pancakes, and that served both of us for breakfast without any leftovers. However, be warned that these are so good, and so light, that had I made the full recipe, it still would have served both of us without any leftovers!

Heat 2 tsp butter in a large non-stick skillet over medium-low heat until butter begins to sizzle. Place five 1Tbsp-scoops of batter in pan, cover, and cook until tops appear dry and bottoms are golden brown, 1 ½ to 2 minutes. Gently flip pancakes and cook, uncovered, until golden brown, about 30 seconds. Keep warm in a 200 °F oven while repeating with remaining batter, using butter as needed. Serve plain, or with your choice of fruit, confectioners’ sugar or syrup.
Posted by Amélie at 4:11 PM

I really liked these! They were creamy and sweet, requiring no syrup as you mentioned. However, I was a little disappointed with them because I was expecting them to be crispy, and they were a little on the soggy side, even the ones I cooked uncovered the whole time. However, hubby has declared these a make-again, and I agree!

I make these now with lactose-free sour cream by Green Valley Organics, and they are fabulous! :)