Centerpieces (of the Beast)

This is post # 666 – the number of the Beast. Had I thought of this in advance, I would have prepared a recipe like devil’s food cake or deviled eggs. But the Engineer doesn’t get to his devil’s food cake for another few weeks, and while I have two recipes bookmarked for deviled eggs, I haven’t gotten around to making either one of them (they always seem like so much effort for so little reward). So instead, I’ll make this post short and use the lentils of the Beast as a theme. You see, even though I can’t prove that they made me sick, I was afraid of using the rest of them in any recipe. I also had some yellow split peas that had been sitting in the pantry for... much longer than I care to admit. It turns out that dried lentils, beans and peas do go bad eventually, even though you can’t tell by looking at them, so I decided that both stashes were unsuitable for consumption. I therefore used them in these nifty centerpieces! For all I know, I might even have 666 lentils in there, too. I just used some wide vases, poured my lentils and peas into them, and added a tealight. Depending on the size of your vases, you can add more tealights, and you can use different materials as filling (even sand or pebbles). I like that these are also fall-coloured, so it was nice to have them on the table this past month! 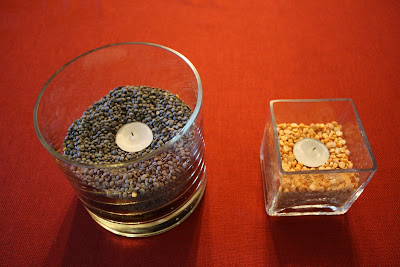