I made some sausage and fig pizzas with goat cheese that were closely based on these from Bon Appétit. We used store-bought pizza dough, because I was too tired to make some, and we baked it in the oven instead of using the grill, but feel free to go either way. We had smoked beef sausages, but Italian would be a good choice here as well. The mixture of all the different tastes was divine, and the Engineer ended up praising it (after initially poo-pooing the recipe for being too fancy). I used the leftover dressing with a simple arugula salad the next day.

For the pomegranate-cumin dressing (which you can scale down to make a total of 5 Tbsp)
7 ½ Tbsp extra-virgin olive oil
4 ½ Tbsp white balsamic vinegar (I used regular)
3 Tbsp sliced fresh mint leaves
1 ½ Tbsp pomegranate molasses
1 Tbsp ground cumin
6 Tbsp minced shallots
(If you can't find pomegranate molasses at the supermarket or a Middle Eastern store, make your own by boiling 1 cup pomegranate juice until reduced to 3 tablespoons syrup, about 15 minutes.)
Whisk first 5 ingredients in bowl. Mix in shallots; season with salt and pepper.

Prepare barbecue (medium-high heat). Halve dough; roll to 10-inch rounds. Brush tops with some of dressing. Grill pizzas, seasoned side down, until golden on bottom, about 4 minutes. Turn pizzas over. Top with Fontina, sausages, figs, and onions. Drizzle with more dressing. Cover; grill until Fontina melts and pizza is cooked through, about 4 minutes. Top with goat cheese. Grill until goat cheese softens, about 1 minute. Top with arugula and serve. 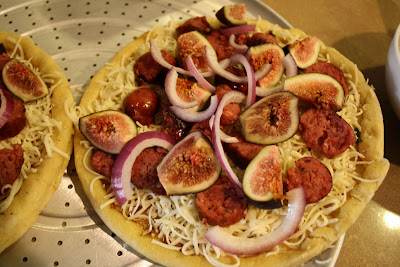 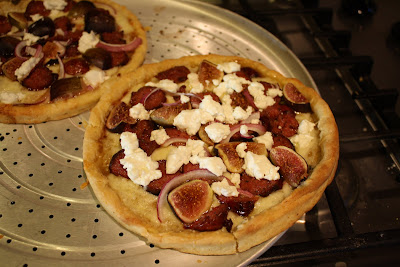 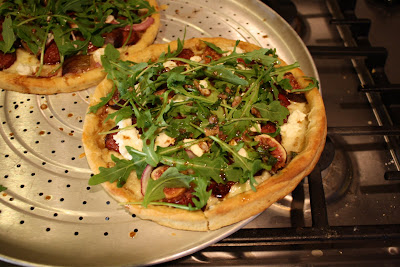 What I love about pizza is that you can put all your favorite toppings on it, and it would still taste delicious. I'm not much of a meat lover, but I love my pizza with lots of cheese, pepperoni and smoked sausages. It just tastes so heavenly and delicious!