As some of you might know, I had been looking for a good Kraft-style mac&cheese recipe that I could eat. I found a pretty good store-bought substitute, but I wanted to make one. And it was trial and error all the way.

I started with this recipe from Taste of Home. While it wasn’t bad by any means, I felt that it wasn’t anything close to the taste that I was looking for. The texture was also quite oily, and I found the sauce more grainy than creamy. 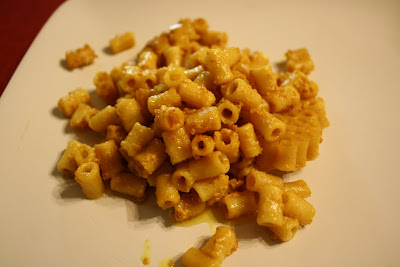 Then I tried a lactose-free but dairy recipe from The Kitchn. I ended up making it on the stovetop, since cooking pasta in the microwave as the recipe suggested quickly turned to disaster. I used less salt, and I used orange Tillamook extra sharp cheddar, which I can digest without a problem. I ended up using more cheese than the recipe called for, though, because the sauce wasn’t creamy enough and I felt that it needed some sort of binder. Unfortunately, I didn’t quite achieve the consistency I was looking for, and the taste of the sharp cheddar overpowered the dish. That being said, it was good, and I felt I was getting closer to the right dish with that recipe. 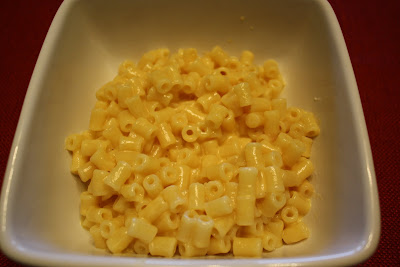 It was on The Kind Life that I finally found THE recipe. The color is relatively close to the orange I wanted, thanks to some tomato paste, and the sauce is quite creamy, even though it’s vegan. It doesn’t taste exactly like cheese, but it’s really good! The secret ingredient, I think, is nutritional yeast, which can taste a bit like cheese with the right seasonings. The recipe below makes 4-6 servings and freezes well.

Bring a large pot of heavily salted water to a boil. Add macaroni and cook according to package directions. Drain and return to pot.

Meanwhile, in a medium saucepan, make a roux by whisking the margarine and flour over medium heat for 3 to 5 minutes. Add non-dairy milk, yeast, tomato paste, salt, and garlic powder to the saucepan and bring to a boil, whisking frequently. Reduce heat to low and let simmer until the sauce thickens. Adjust seasoning to taste and stir in lemon juice and agave.

Toss the cooked noodles with the sauce and serve immediately. 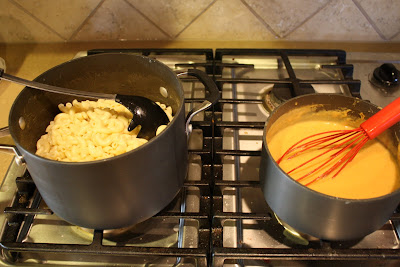 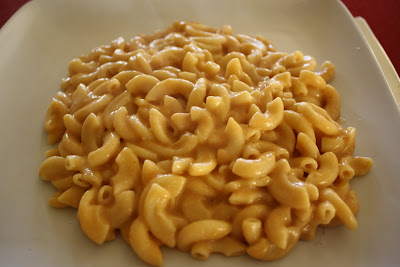