I finally caved and bought light agave nectar. I have a few bookmarked recipes that call for it, and I am unsure of how to substitute (various sources give me various equivalences for the same ingredients, so that if I decided to use maple syrup instead, for example, the correct ratio is anywhere between 1:1 and 2:1, depending on who you ask). It tastes a bit like a light version of molasses. For this pie in particular, I think you could use maple syrup instead and taste as you go; fine sugar or honey would work, too. I used 5 Tbsp of the agave nectar here.

I couldn’t find the right kind of tofu (I had the Chinese stuff sold in the produce section, not the room-temperature aseptic Japanese tofu), and this affected the final texture. For one thing, using cold tofu made the melted chocolate seize up a bit, and the texture was on the granular end of the smooth spectrum. The Engineer said he could taste the deception. (Actually, he asked me what the trick was, which made me sad because I thought he assumed that my pies are tricked somehow. He said that was not the case, but he could taste there was something healthy about it! It was good, but he’s right, not quite creamy enough. I’ll look for the right kind of tofu before I try this again, or at the very least let it come to room temperature.)

This pie, found on Flickr, is vegan-ish in the sense that it’s incredibly easy to make it vegan – or gluten-free, for that matter. I used a store-bought granola crust which was not vegan, but feel free to buy or make something to suit both your taste and dietary restrictions. You also need to keep an eye on the ingredients in the chocolate you use, of course. I recommend quality chocolate bars (I used some 60% cocoa Ghiradelli) instead of chips, since the latter are made to resist melting. You can of course adjust the ingredients to taste, but this pie is so easy a monkey could do it.

1 pie crust (ideally a cookie crumb crust rather than a pastry crust)
12 oz of quality semi-sweet chocolate (don’t skimp on this, it’s the main taste of the pie; after all, you don’t want to taste the tofu)
3 to 5 Tbsp of agave nectar, maple syrup or honey (to taste)
20 to 24 oz (just under 2 packages; I used 21 oz) of "silken", firm tofu (that is, you want the Japanese stuff typically sold at room temperature in aseptic packages, not the Chinese stuff you find chilled in the produce section)

Melt the chocolate in a double boiler. Once melted, blend the chocolate, agave nectar, and tofu in a food processor. Do this quickly before the chocolate begins to resolidify, which will make blending difficult. Pour into the crust and chill for 2 to 3 hours. Top with a dollop of lactose-free whipped cream when serving, if you wish; you can also add a sprinkle of cinnamon if you are so inclined. Or, you know what I suddenly think would be great? Marshmallow fluff! 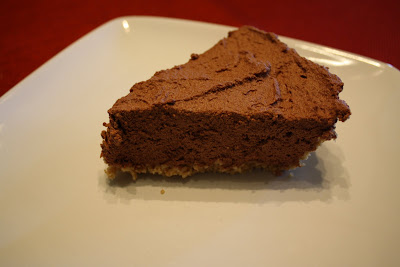