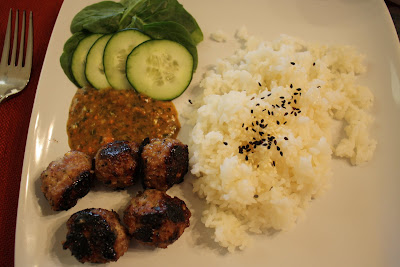 I made these meatballs based on a recipe from Bon Appétit. It’s a Vietnamese-style recipe that the Engineer and I both really enjoyed. I made a few modifications to the sauce, by using oyster sauce instead of fish sauce and reducing its amount by half, as well as adding salt by mistake and using a pinch of chili powder instead of a minced chile pepper. I also made it in the food processor. I’ll give you my measurements here, but feel free to adapt them. The sauce had some bite to it, from the lime juice, but it was very pleasant! I served the meatballs with spinach instead of butter lettuce, with a side of rice with gomashio.

For the meatballs
Chill pork in freezer while making lemongrass paste. Combine lemongrass and remaining ingredients in processor; pulse until paste forms. Add chilled pork; pulse to blend. Shape into 24 balls (each about 1 tablespoonful). Place on rimmed baking sheet. Cover; chill at least 1 hour and up to 1 day.

For the dipping sauce and assembly
Cut bottom 3 inches from lemongrass. Smash with rolling pin, then mince. Measure 1 Tbsp and place in small bowl (reserve the rest for another use). Add lime juice, fish sauce, cilantro, carrot, sugar, and chili to bowl; whisk until sugar dissolves. (I did this in the food processor.)

Heat oil in large skillet over medium heat. Add meatballs; brown until cooked through, turning occasionally, about 15 minutes. Transfer to 1 side of large platter.

Arrange lettuce leaves and cucumber on platter with meatballs. Place meatballs in leaves, garnish with cucumber, and drizzle dipping sauce over. 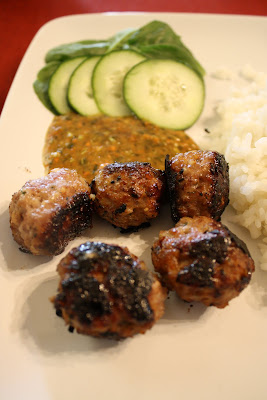