If it quacks like a duck, looks like a duck and walks like a duck, then it’s a duck, right? Well, what about when it doesn’t quack like a duck? For the past few months, the Engineer and I have been seeing ducks that whistle. They fly in V formation, and when they are low enough, we can tell they definitely look like ducks. But they don’t quack at all, they whistle like some songbirds would. It turns out they’re black-bellied whistling ducks! I like having a name to put to that animal, and confirmation that I’m not crazy to think those ducks are whistling – though I do think somebody pulled the wool over my eyes when teaching me about barnyard animals and their sounds.

There’s also a little green lizard that I’ve referred to not once, not twice, but three times as a gecko, because that’s what a local had called it, and who am I to argue with a local about local wildlife I’m just discovering? But it turns out it’s not a gecko at all. I saw one do this, and I now know it’s an anole lizard. The green ones and the brown ones are from different species, but can on occasion cohabitate. 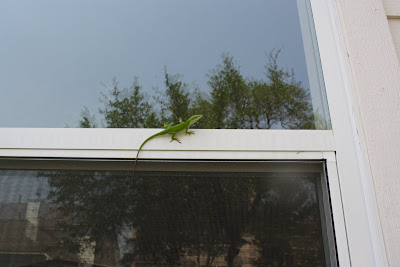