Almost two years ago, I noticed that some of my tops had tiny holes in the front, near the bottom hem. I first wondered whether it could be some kind of moth eating away at them, but eliminated that theory when I realized that the holes were always on the same spot, even though t-shirts and tank tops were not only stored in different drawers, but folded differently.

Since the holes always appeared near the area where my belt buckle hit, and since I hadn’t noticed any before buying a new belt on Granville Island in the fall of 2009, I thought “Hey! It’s this belt that’s wearing holes in my shirts!” So I stopped wearing it that winter, only to notice a hole on a new spring shirt in early 2010. I had never worn the shirt with that belt, so that theory was also eliminated. And my shirts kept getting holes in them. I thought maybe it was belts in general, then, that were problematic for me.

The best belt replacement I found was the Hollywood Hip Hugger, which is great for people like me who often have gaping at the back of their pants. It also eliminates belt buckle bulge under fitted tops, which is great. But I still noticed new holes, and I even wore a hole in the back of a shirt by leaning against a chair back as I was sliding down in a sitting position, because the chair rubbed against the metal clip on the hip hugger through the fabric. A light bulb dimly flickered on in my head as wheels started turning.

It was only last fall that I finally saw a hole being made, as I was leaning against the counter in front of the sink. The countertop rubbed against the button of my jeans and tore a hole through the fabric of my shirt in the process! It turns out I have the bad habit of not standing up straight (despite my mother’s admonitions), and I often lean against surfaces. Why did this start only a few years ago, when I had presumably been doing it all my life? I don’t know. I can only guess that it’s because I’ve been spending more time in the kitchen since I married the Engineer and started this blog.

I now have two solutions. First, wearing pants with an elastic waist instead of a button. Let me be clear before you turn me in to What Not To Wear: I’m not talking about sweat pants or anything like that; I’m talking about nice pants like the ones Reitmans sells (which are perfect for getting through airport security, fyi). Second, I now put on an apron anytime I’m in the kitchen, even if I’m just washing a few dishes.

I’ve also been able to rescue one shirt: the hem was a bit long to begin with, and it had been hit the worst. The front was so scarred that my improvised mending was a horrible sight, so I wasn’t wearing it anymore. I ended up shortening the hem: I removed an inch from the bottom, folded the edge over three times and pressed it, then sewed two straight lines in parallel and a zigzag line between them to keep the knit edge from coming undone. On the plus side, I’ve worn the shirt since. On the downside, sewing a knit fabric properly takes experience, which I don’t have yet, so it’s definitely not a professional-looking hem (not even decent-looking, in all honesty), and that’s why I’m not showing you a close-up. 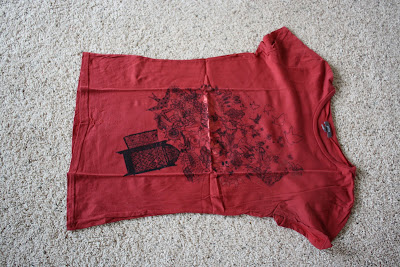 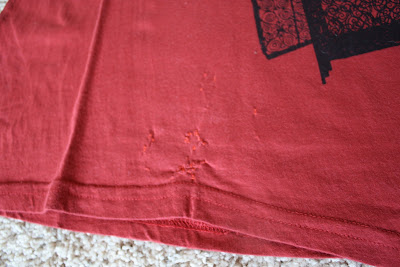 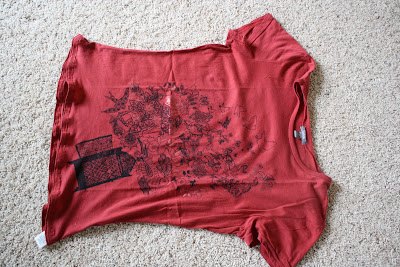 I just found out I'm far from the only one who had this problem! Check out this cool post: http://www.deliciousdays.com/archives/2011/07/11/tiny-holes-in-your-favorite-shirts-kitchen-mistery-solved/

I'm here FROM the blog you mention above (I read your comment there).

I was so angry because i have been having this tiny holes in my cotton clothes for a while, but only in MY clothes and not my husband's or my daughter's, and always in the same area (under my belly button), and no explanation for this selective washing machine - detergent - stain removal- or whatsoever was causing them... until now.

I own a house with no kitchen furniture (no countertops at all, because the house was new wen we bough ti, and my husband and I haven't finished furnishing it yet) so the countertop theory is not aplicable to me.

BUT i read your post and i realized i do wash the dishes every night, and i have been rubbing my stomach in the metal corner of the sink which is exactly the area with holes in my shirts.

Shame i ruined so many shirts, some of them brand new. The good news is that now i know the cause and i can prevent myself to keep washing the dishes in my working clothes!

I should change first, or at least buy aprons for that task.

You're welcome! Now that I systematically use an apron (or at the very least tuck in the shirt if it's only for a few minutes), I haven't had this problem anymore.

can't believe so many people have had this problem too, it has been driving me bananas for the last 3 years! got a granite worktop and i think that it definitely the cause having read your post and deliciousdays - can't believe it was so obvious all along! i was sure it was the button protruding or the belt. thanks for fixing it!

You're welcome! It's so weird that so many people seem to have this problem, but only in recent years... Anyway, now that I know what's going on, I can avoid it.