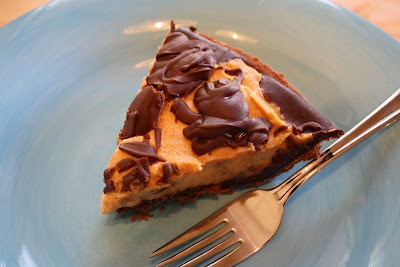 I absolutely must share this peanut butter pie recipe. It’s originally from The Kind Diet, which I mentioned before (here and here). It’s also posted on The Kind Life. It was out of this world! The mix of chocolate and peanut butter was just so, so good. The Engineer referred to it as a “crazy-a** pie” and heartily had seconds (after a little break for digestion). This pie is very rich, though not obscenely sweet. Of course, this all depends on what kind of peanut butter and chocolate you use: a natural peanut butter and grain-sweetened chocolate chips, plus ¼ cup of maple syrup, isn’t necessarily anything to feel guilty about! You can use sweeter stuff too. I ended up using a mix of Guittard extra dark chocolate chips and Ghiradelli semi-sweet chocolate chips, instead of trekking to the store to find yet another kind of chocolate (against character, I know, but I’m maturing). I also used So Delicious’s coconut milk beverage instead of soy milk. I ended up changing just one direction, to leave the crust in the fridge longer to chill completely before pouring in the filling. Let me just reiterate how impressed I was by this pie; it’s definitely going to grace my table again in the not too-distant future, especially given how easy it is to make!

As far as dietary restrictions go, you’re going to love this. The recipe itself is vegan (though you probably wouldn’t guess it by tasting it). The filling gets its consistency from silken tofu – I had some leftover in the fridge that I wanted to use before it went bad, and I could not have chosen a better recipe. I used a premade chocolate Keebler Ready Crust, which happens to be vegan, but Arrowhead Mills makes one too.. In the store, I also saw a chocolate macaroon pie shell that was kosher for Passover, so presumably gluten-free as well. I didn’t try it, but if it is hardened chocolate with shredded coconut, then skip the step in the recipe that calls for prebaking it. You can also make your own, of course. Finally, you might have noticed the “nut-free” tag on this post. That’s because I’m pretty sure that you could make this pie with WowButter (formerly FreeNut Butter), a peanut butter substitute made from soy and, according to online reviews, surprisingly close in taste to peanut butter. I don’t know firsthand how it compares to nut butters or pea butters, but I definitely think it’s worth a shot!

Bake the cookie crust for 4-5 minutes just to make it a bit crispy. Cool completely.

Melt the chocolate chips in the top of a double boiler set over simmering water. If you don’t have a double boiler, place a stainless steel bowl over boiling water and melt the ingredients in it. Whisk in the milk until combined and smooth.

With a measuring cup, scoop out about ¼ cup of the chocolate mixture, then pour the remainder into the cookie crust. Place the cookie crust in the refrigerator to cool completely, at least 30 minutes.

After the filling chills, combine 1 cup peanut butter, the tofu, syrup, and vanilla extract in a food processor or blender; process until very smooth, scraping down the sides of the bowl as needed.

Pour the peanut butter mixture on top of the chilled chocolate filling in the cookie crust, smoothing it out over the pie as you pour, and return the filled cookie crust to the refrigerator to chill for 1 hour or until firm.

To serve, return the reserved chocolate filling to the double boiler, or stainless steel bowl, and stir in the remaining ¼ cup peanut butter. Stir until the chocolate and peanut butter are very well combined and very warm. If the mixture seems too thick to drizzle, add some soy milk until it is runny enough to pour.

Decoratively drizzle the mixture over the chilled pie in zigzags or swirls, or use a small spatula to spread it smoothly over the whole pie. Refrigerate for 15 to 20 minutes before serving. 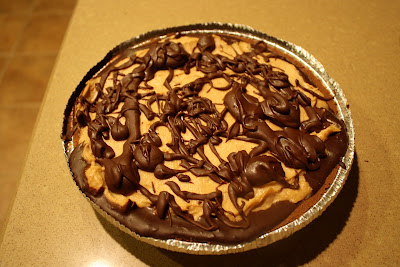 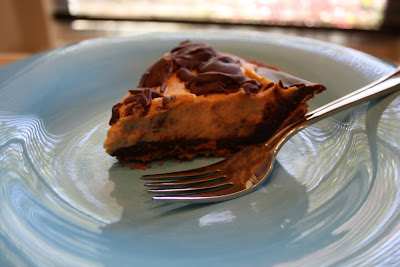 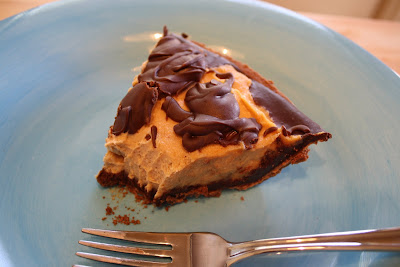