It turns out that what I used as cinnamon for most of my life may in fact have been cassia. It’s also called Chinese cinnamon, but it isn’t actually cinnamon. It is sold under the name cinnamon in North America, but that practise is banned in Europe, for example. It is cheaper that actual cinnamon.

Even then, when I say actual cinnamon, it’s somewhat confusing, because there are several different species of Cinnamonum, and several cultivars of each species. When we moved to San Antonio, we first bought Saigon cinnamon, also called Vietnamese cinnamon, or Cinnamomum loureiroi by its Latin name. It was readily available, and we didn’t look into it at first. But it turns out that Saigon cinnamon is more closely related to cassia than to true cinnamon. What I call true cinnamon is Cinnamomum verum, also called Ceylon cinnamon. It is not as readily available in grocery stores; I ordered mine online. 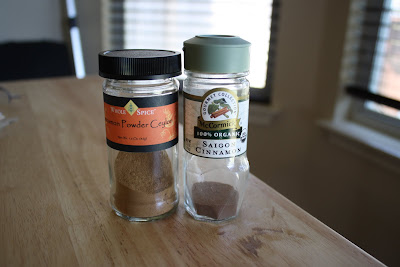 Since reorganizing our spice rack, I’ve decided to now stock Ceylon cinnamon instead of Saigon cinnamon. Its smell is more subtle than that of Saigon cinnamon, and I would say less floral. The powder is finer and paler. Some recipes call for Ceylon cinnamon specifically, but to be perfectly honest, I don’t think I would notice the difference in most desserts. It would have to be something delicate, like a crème brûlée, flavored with only cinnamon, and then I could tell one from another. But out of principle, I like having the real thing in my spice rack; otherwise, it feels like I’ve been had. I also tend to prefer flavorings that aren’t necessarily in-your-face, as is often the case with “cinnamon” in the United States. If I’m eating apple pie, I want to taste the apples first, then maybe a hint of cinnamon or nutmeg, but the spices shouldn’t be the star players unless you’re specifically making, say, snickerdoodles. So hopefully this will suit my cooking and baking better
Posted by Amélie at 11:54 AM