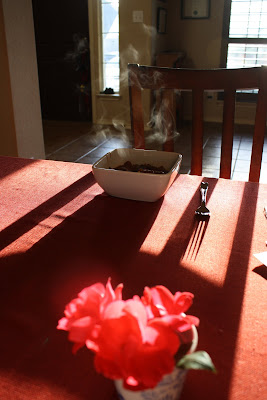 I made this recipe from Bon Appétit in good part because it helped me use up the raw butternut squash stashed in my freezer as well as the cracked wheat (used instead of bulgur) left over from another recipe. It was a mitigated success, but I’ll take all the blame for it: I made some modifications that, in the end, made the dish too bland. I reduced the amount of chili powder by half (which was not necessary, as my chili powder is mild), replaced an onion with two shallots, and omitted the chipotles. I also didn’t use oregano, which I could have sworn I had, but didn’t (I threw in a pinch of thyme instead), and ended up not garnishing the dish. I would have a few modifications for the recipe, however: chopping the tomatoes and using less water (I did the latter anyway, just because my Le Creuset has its limits). The recipe below reflects those changes. What I loved about this recipe, though, is that the beans were still a bit toothsome, and with the cracked wheat, it gave a great texture to the chili; I didn’t miss the meat at all!

This is a pretty big batch, though, about 8 to 10 servings, but it freezes well.

Stir squash and bulgur into chili. Simmer uncovered over medium-low heat until squash and bulgur are tender, about 30 minutes. Season to taste with salt and pepper. Divide chili among bowls. Serve with sour cream, cheese, red onion, cilantro, and pickled jalapeño rings. 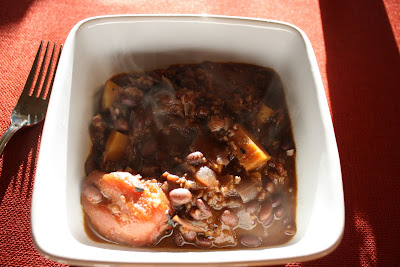