Simple risotto to save the day 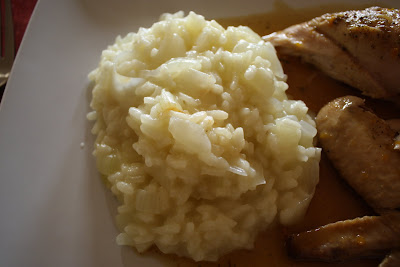 I thought I would share a cumin and citrus chicken recipe by Bobby Flay, but I won’t. It was good, but not better than any other chicken recipe I have. I had high hopes for it, probably because of how good it had looked as I was preparing it. But I felt that it should have tasted like cumin more, and it was too bitter from the citrus rinds. There may have been something unclear in the instructions, though, because I was supposed to stuff the chicken with 5 orange wedges, 5 lime wedges, garlic cloves and fresh oregano. Now listen, Mr. Flay, I don’t know what size chickens you have, but over here, when I’ve got garlic, oregano, 2 orange wedges and 2 lime wedges stuffed in my 3-lb chicken, there’s no room for the extra wedges in there! I placed them around the chicken instead, which probably made the sauce more bitter than it should have been, but what else was I to do? A little brown sugar in the sauce helped, but I didn’t like the recipe enough to keep it. 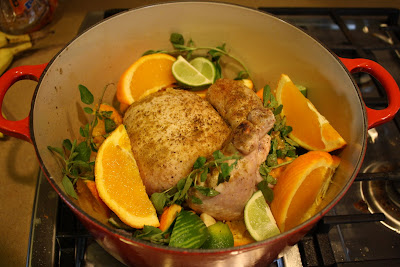 I did serve it with Arborio rice on the side, though, and it completely stole the show. It’s the second time I make this recipe, which is simply adapted from the side of the Rice Select packaging. I absolutely love it, and really, if I’m going to share a recipe I can stand behind, it should be that one. So without further ado, here’s my simple go-to risotto. This makes 4 servings, but you may be tempted to have seconds.

Sauté the onion in oil and butter for 3 minutes.

Add rice, stirring for about 2 minutes.

Stir in 1 cup of broth. Continue cooking and stirring until liquid is absorbed.

Gradually stir in remaining broth 1 cup at a time, cooking and stirring until liquid is absorbed before adding the next cup. 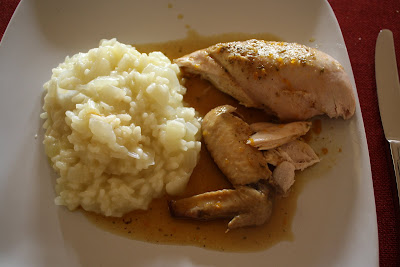