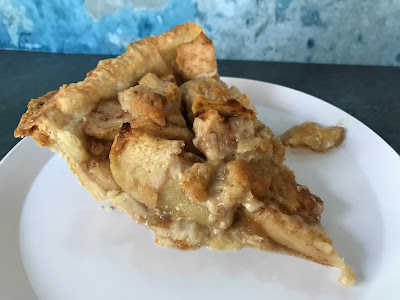 My go-to pie crust recipe was Martha Stewart’s pâte brisée, which is a breeze to make in a food processor – you eventually learn not to add too much water and not to process too much, and it comes out fine. Occasionally, I’d make Baking Illustrated’s pie crust, which calls for shortening in addition to butter. But when I read Jessica Fechtor’s Stir, she talked about J. Kenji López-Alt’s method, and Lord knows I respect his work ethic, so I dove in. He wrote a three-part series on making the perfect apple pie (how to make the best pie dough, the best apples to use, and how to cook them) on Serious Eats.
It turns out that J. Kenji López-Alt came up with a fool-proof pie dough recipe because he realized that pie dough is not flour coated with butter, as we’ve often been told, but butter coated with flour. That’s why the amount of water matters so much in most recipes – the water will interact with the flour, which is on the outside. (If butter were coating the flour, it would repel the water.) Here’s his list of 7 myths to dispel about pie dough, if you’re interested. So in a nutshell, his recipe calls for first combining some of the flour and the butter in a food processor to form a fat-flour paste (you don’t have to worry about overmixing, because the tough gluten will only develop in the presence of water and you haven’t added it yet), then adding the rest of the flour and the water in a bowl, gently. It produces a dough that is tender and easy to roll, and I think I’ll have to make that my go-to recipe from now on! Note that I measured all the flour by weight, and that’s what I recommend.
Jessica Fechtor’s apple pie uses this dough as a base, but the topping is adapted from a different recipe. In my opinion, it didn’t come out too well. It was hard to spread and ended up too thick in some places, which made it too crunchy for my liking. It was a nice idea in theory, but next time, I’ll omit it and make a double-crust pie instead. That being said, I *really* enjoyed this! I used 2 smallish McIntosh apples and 3 largeish Granny Smith apples.
For the pie dough (single crust; see note above)
¾ cup and 3 Tbsp. (118 g) + a scant ½ cup (59 g) all-purpose flour, divided
1 Tbsp. granulated sugar
½ tsp. fine sea salt
10 Tbsp. (142 g) lactose-free butter, cut into ¼” cubes
3 Tbsp. cold water
For the filling
2 ½ lbs (5 to 7 medium) apples, ideally a variety (see link above)
¼ cup (50 g) dark brown sugar
1 Tbsp. cornstarch
1 tsp. cinnamon
¼ tsp. fine sea salt
1 Tbsp. fresh lemon juice
2 Tbsp. apple brandy, like Calvados
For the topping (see note above)
½ cup (1 stick; 133 g) lactose-free butter, cut into pieces
¾ cup (150 g) granulated sugar
¾ cup (94 g) all-purpose flour
½ tsp. nutmeg
For the pie dough
Combine the ¾ cup plus 3 Tbsp. (118 g) flour, sugar, and salt in the bowl of a food processor. Add the cubed butter and pulse until the flour is fully incorporated and the dough begins to clump around the blades (25 to 30 pulses). Spread the dough around the bowl with a rubber spatula, sprinkle with a scant ½ cup (59 grams) flour, and give it 3 to 5 short pulses. Transfer the dough to a large bowl, sprinkle with the water, then fold and press the dough with the rubber spatula until it comes together into a ball. Form the dough into a 4” disk, wrap tightly in plastic, and refrigerate at least 2 hours.
For the filling
Rub together the dark brown sugar, cornstarch, cinnamon, and salt in a large bowl. Wash, dry, but do not peel the apples (I peeled them anyway because that’s how I roll) and cut them into ½” slices. Pile the apples into the bowl on top of the sugar mixture, sprinkle with lemon juice and brandy, and mix gently with your hands.
For assembly
Preheat oven to 425 °F. (I also set a rack in the lower section of the oven.)
Remove the pie dough from the fridge and let sit until rollable but still cold. Flour your counter and roll out the dough into an 11” circle. Transfer the dough to a 9” pie plate. Crimp or flute the edges, if you’d like. Pile the apple filling into the shell – you’ll have a heaping mound, but it will shrink down in the oven – and put into the fridge while you make the topping.
For the topping
Melt the cut-up stick of butter in a small saucepan over medium-low heat. Add the sugar and stir well. Turn the heat down to low and add the nutmeg and flour, stirring to form a thick paste. Remove from the heat, grab the filled pie from the fridge and, using a rubber spatula, spread the paste over the apples. You don’t want to cover the apples completely; they should peek out here and there. This “venting” keeps the apples from steaming and turning to much. (I also used a silicone ring to prevent the edges of the crust from burning.)
Bake at 425 °F for 15 minutes, then lower the temperature to 350 °F and bake another 35 to 40 minutes, until the pie is golden brown on top and bubbling. Let cool to room temperature, or just above, before slicing to give the filling a chance to set up. 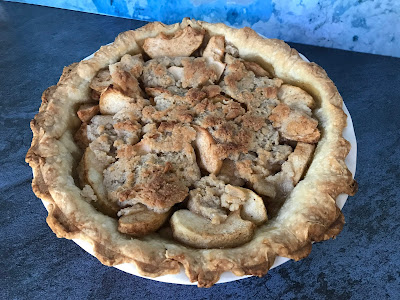 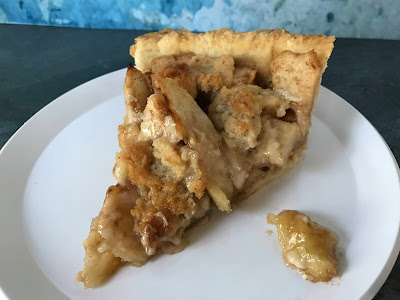