As you may know, the Engineer is in the process of making every recipe in Baking Illustrated, IN ORDER. (It’s a labour of love... and OCD.) That was fine for the bread section, but now that he’s baking pies, it’s a little more complicated. You see, pie fillings are not always in season. 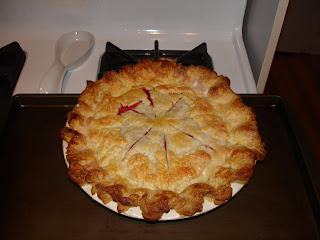 For the strawberry and rhubarb pie, he used my stash of frozen rhubarb from last summer and store-bought frozen strawberries. 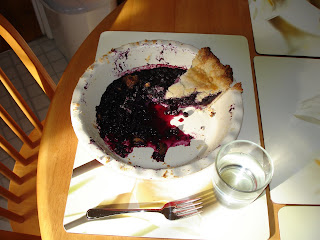 For the blueberry pie, it was store-bought frozen blueberries.

Then came the peach pie. Peaches in November, in Montreal? Tough luck, buddy. Three weeks went by without our weekly pie, because the Engineer didn’t want to skip ahead to the next recipe. But wouldn’t you know it, we finally found some peaches in a little Middle Eastern store outside Jean Talon market! Did we care that they were $5/kg, shipped in from God knows where and still a bit hard? No. It was the best peach pie we could have hoped for. 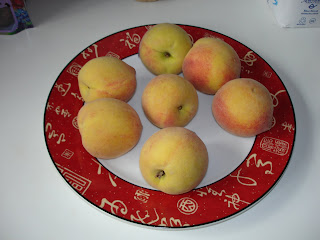 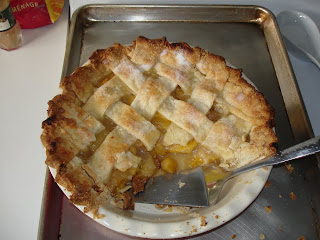 By now, I have become convinced that while I may have the easiest pie crust recipe, the Engineer has the best one. It calls for both butter (for taste) and shortening (for flakiness). And here it is: the Baking Illustrated pie crust!

Process the flour, salt and sugar in a food processor until combined. Add the shortening and process until the mixture has the texture of coarse sand, about 10 seconds. Scatter the butter pieces over the flour mixture; cut the butter into the flour until the mixture is pale yellow and resembles coarse crumbs, with butter bits no larger than small peas, about ten 1-second pulses. Turn the mixture into a medium bowl.

Sprinkle 6 Tbsp of ice water over the mixture. With a rubber spatula, use a folding motion to mix. Press down on the dough with the broad side of the spatula until the dough sticks together, adding up to 2 Tbsp more ice water if the dough will not come together. Divide the dough into 2 balls and flatten each into a 4-inch disk. Wrap each in plastic and refrigerate at least 1 hour, or up to 2 days, before rolling.
Posted by Amélie at 11:05 AM

Making every single pie, in order, without even skipping one due to lack of ingredients.
That's dedication. And maybe a bit OCD.
At least the pies are good!