I realize that compared to most other North American cities, Montreal has been a little late to jump on the bandwagon of the cupcake trend. I decided to talk about five of its cupcake shops in this post (as far as I know, they are the only so-called cupcake shops, as opposed to bakeries that happen to sell some cupcakes). In all cases, regular-sized cupcakes are $3.00 plus taxes, so the only real difference is in the taste. I could elaborate on the fact that all these stores somehow chose pink and brown as their colors, but I won’t. 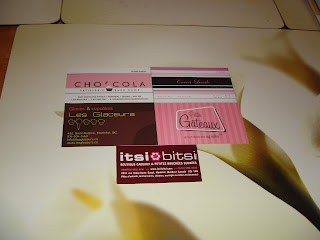 The first one I’ll point out is Itsi Bitsi, in gentrified Little Burgundy. This place also sells gifts and tea. In addition to regular standby cupcake flavours, there are two featured flavours each day. Presentation is great, and the number of cupcakes is small enough to ensure freshness. I found the service somewhat curt, though, as if the cashier wanted me out of there quickly, even though I was the only customer in the store on a Thursday morning. I tried the Bet Velvet with white chocolate frosting, a riff on Red Velvet. As you might know, the original red velvet cakes were coloured with beets instead of food coloring (and take it from me: when you put beets in a cake, you really can’t taste them). This cupcake, though, did not have any cocoa powder in it, so it was very pink. It was moist and delicious; I would definitely buy this cupcake again. A nice bonus is the perfectly shaped box for a cupcake to go. 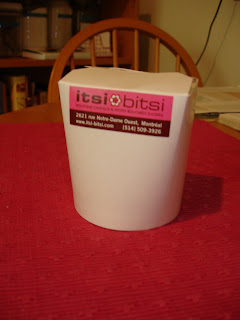 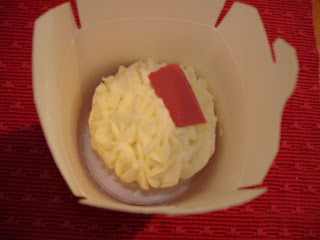 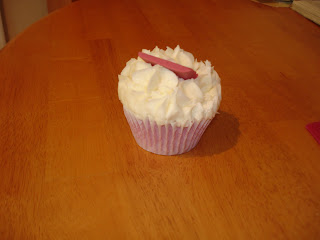 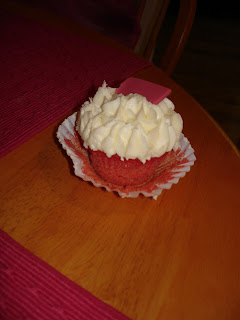 There is also Cho’cola, on Monkland (there are two websites: this one, which is hardly functional and hasn’t been updated in a long time, and that one, which is not even online yet, but is advertised on their business cards). This place has a cute but modern interior. It serves meals like salads and sandwiches, and you can also buy alcohol there. The terrasse is great, day or night. And what this place has going for it is that it is entirely nut-free – a definite plus. There is a wide selection of cupcakes, but.... I think there are too many cupcakes for the inventory to clear quickly. The first time I went was a weekday evening, and I had a vanilla-raspberry cupcake (which unexpectedly contained chocolate chips). It was a little dry, and not worth the $3.33 I paid for it. However, I did try their cupcakes a second time on a Saturday afternoon (pictured here). The Oreo cupcake was quite good, with a very thick swirl of sweet icing, vanilla cake strewn with chocolate cookie crumbs (probably containing sour cream or buttermilk), and topped with half an Oreo cookie. The vanilla cupcake and the chocolate cupcake (the latter tasting of baking soda), with their mile-high butter frosting, were not impressive. I’m told that Cho’Cola is more known for its cakes than its cupcakes, though. 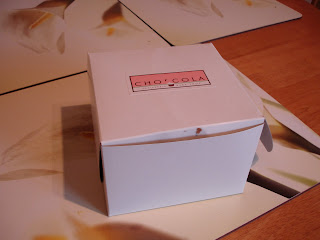 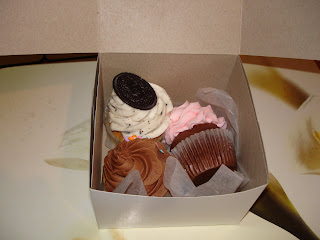 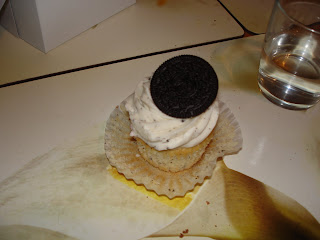 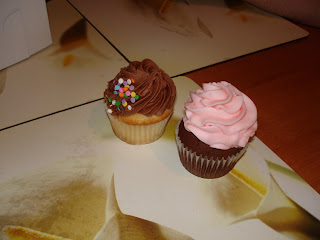 I tried Les Glaceurs, on St-Sulpice. They sell cupcakes, as well as ice cream and sorbet from Le Bilboquet. I had heard good things about their red velvet cupcake, and you know what a sucker I am for red velvet, so when I happened to walk by on a summer pilgrimage to the Old Port, I just had to try it. I really was not disappointed! They gave me a cute little plastic container to carry the cupcake home, and it was small enough to fit into my purse. The cupcake itself had a definite taste of good cocoa, though not overwhelming, and was pleasantly moist. The flavour was really wonderful. The icing was cream cheese and vanilla, which was maybe a bit much, but it was still good. The tiny dark pink dot you see on top was actually marzipan – I love it, but stay away from that place if you have a nut allergy! 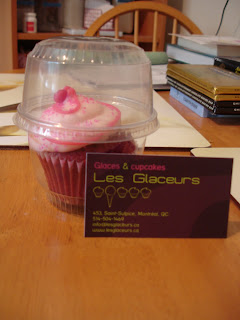 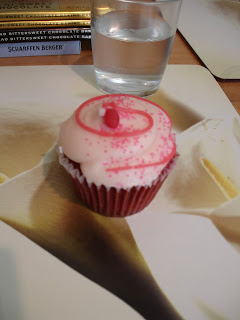 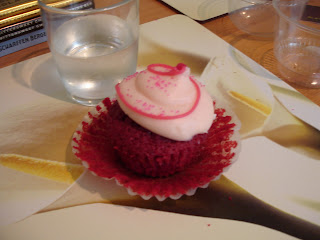 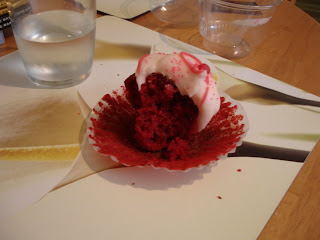 I couldn’t resist popping into Petits Gâteaux, on Mont-Royal. This place gets bonus points for actually using the proper term for “cupcake” in French. They also had what were probably the most beautifully presented cupcakes so far. There was a wide selection, but not so wide that one would automatically be suspicious of freshness. I tried three of the mini-cupcakes (at $1.25 + tx each, not so easy on the wallet... but oh so easy in the mouth). The citrus (agrumes) cupcake was good in and of itself, and it was topped with orange frosting that tasted like an orange creamsicle, along with lemon and orange zest. Refreshing and sweet. Next, the raspberry-sour cream cupcake: absolutely delicious. Filled with fresh raspberries and topped with a dollop of white chocolate mousse and bits of dried raspberries. Superb! Third, the chocolate cupcake. The cake was slightly dry, but the chocolate mousse topping (dusted with cocoa) more than made up for it. It was dark chocolate, rich and not too sweet. So, lovely cakes at Petits Gâteaux. 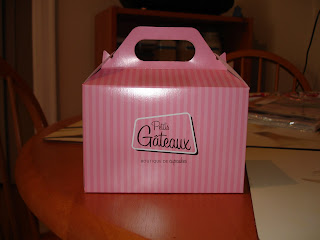 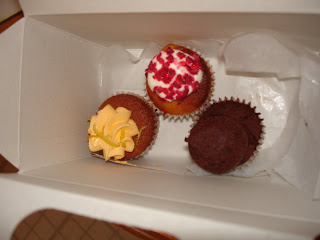 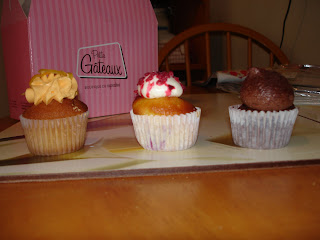 Finally, my favourite place: Cocoa Locale, on Du Parc. In my opinion, this little shop has the best cupcakes AND the friendliest service. I also found this video on YouTube, which I just had to share. Reema, the baker, is ALWAYS in a good mood. Now, Cocoa Locale doesn’t serve cupcakes exclusively; there are also bigger “cupcakes for two”, little cakes (about 4 servings) and regular cakes. The cupcakes have more of a glaze than a frosting, but this results in the perfect cake/topping ratio in a single bite for my taste. The vanilla cupcake was perfect, very flavourful and moist, topped with pink glaze and a carnation petal. The famous chocolate-chai cupcake (made with Valrhona chocolate, mind you, along with cardamom, ginger and cinnamon) was divine. The gooey icing made for a messy treat, sure, but the cake was moist, fragrant and delicious; it was my favourite cupcake so far. Apparently, Reema’s red velvet cakes are very good, too, but I haven’t been fortunate enough to try one. (The downside with this bakery is that you don’t know ahead of time what flavours will be available, whereas Itsi Bitsi has a set schedule posted online.) On another occasion, I also tried the vanilla-raspberry-rose cake, which was absolutely delicious (even the Engineer, who doesn’t normally like raspberries, really liked this one). I just love Reema’s cakes, and her inspiration to decorate them with flowers. 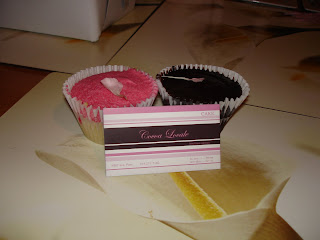 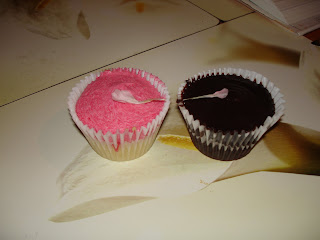 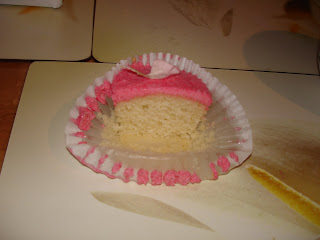 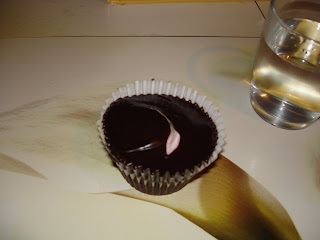 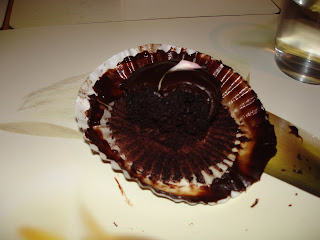 I just wanted to mention that I'm aware of a place called Clever Cupcakes, but as of this writing, they do not offically have a store-front, so I didn't review them. (But they are professionally licensed; they deliver cupcakes and you can also order some to pick up, near Lionel-Groulx metro.)