I realize I’ve posted quite a few meatball recipes lately, but here’s to hoping you’re not tired of them! I found this great recipe for pork-sage meatballs with a lemon-thyme sauce and decided to share it. (For those who need more convincing, it’s a recipe adapted from Chez Panisse.) I served it with improvised latkes, since it was Hanukkah and all. Great meal! I used a baking sheet and cooked the meatballs in the oven, because I needed the stovetop for the latkes, but either way is fine. Since I then didn’t have the pan to deglaze for the sauce, I ended up using cornstarch to have it thicken a little for serving. 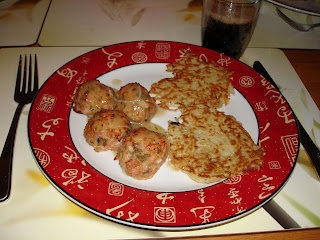 Gently sauté the onion in a little olive oil until it is soft but not coloured. Season with a pinch of salt and set it aside to cool. 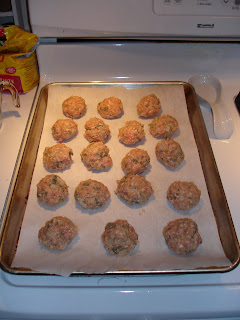 To cook, heat a skillet large enough to hold all the meatballs in one uncrowded layer. Add a little olive oil. When the skillet is heated, add the meatballs, shaking the pan to keep them from sticking. Using tongs to turn so they brown evenly, cook the meatballs until they are no longer pink in the center and lightly browned on all sides. Remove from the pan to a plate and immediately make the sauce.

Remove the meatballs from the pan, and deglaze it over medium heat with the chicken broth and wine. Simmer until reduced by at least a third. Add the lemon juice and thyme, then add the meatballs back in again as well.

Simmer until ready to serve - at least 10 minutes, but up to half an hour. Serve meatballs with the sauce poured over and garnished with lemon zest curls and thyme sprigs.
Posted by Amélie at 12:43 PM