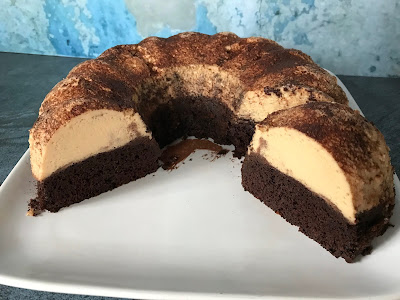 This recipe is from Smitten Kitchen. A chocoflan is a hybrid confection, part chocolate cake and part custard-like flan. And it’s one of those magic cakes where you put the cake batter on the bottom of the pan, the flan on top, but then they switch places while baking in the oven. And when you flip the pan over, you end up with a base of cake topped with flan, and it’s perfect! I mean, the flan wasn’t as smooth as I would have liked when unmolded, but I dusted it with cocoa and that took care of that.
So, in order to make this cake, I read up on vegan dulce de leche and I made my own using sweetened condensed soy milk. (You could also make a lactose-free version of Deb Perelman’s from-scratch recipe.) I used 2 containers of 11 fluid ounces each; I poured the containers in an oven-safe dish set in a water bath and left them in the oven at 425 °F for 2 hours and 15 minutes, then I still wasn’t satisfied with the color or consistency, so I put the contents in a saucepan over low heat for another 1 hour and 30 minutes. I did eventually get the consistency I wanted, and it ended up yielding exactly the 1 ½ cups called for in the recipe. That being said, I think that next time, honestly, I would just buy vegan caramel like this (or maybe even mix it with coconut jam). Otherwise, this is obviously something best made the day ahead, if you don’t want to get overwhelmed! I felt like it just wasn’t worth the trouble to get lactose-free dulce de leche versus storebought lactose-free caramel. 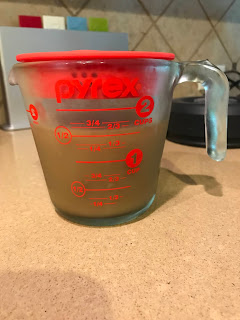 In any event, the chocoflan itself was fabulous! The cake was moist, all the flavors complemented each other well, and it was just so good! My family wants me to make it again.
For the flan
1 ½ cups (about 380 g) lactose-free dulce de leche (see note above)
1 12-oz. can lactose-free evaporated milk (mine was 11 oz.)
4 oz. lactose-free cream cheese, at room temperature
1 ½ tsp. vanilla
1 pinch kosher salt
5 large eggs
For the chocolate cake
1 1/3 cups (160 g) flour
1 cup (200 g) sugar
½ cup (50 g) cocoa powder
1 tsp. baking soda
½ tsp. baking powder
½ tsp. kosher salt (Diamond Crystal; so that’s ¼ tsp. Morton)
½ tsp. cinnamon
6 Tbsp. (85 g) lactose-free butter, cubed, at room temperature
½ cup brewed coffee, cooled
½ cup lactose-free buttermilk substitute
1 large egg
1 tsp. vanilla
For serving (optional)
dulce de leche, cocoa, cinnamon, lactose-free whipped cream
Preheat your oven to 350 °F. Grease a 10-cup bundt pan and set aside. Make sure you have an oven-safe dish large enough to contain the bundt pan (I used my turkey roasting pan).
For the flan
In a blender, combine the dulce de leche, evaporated milk, cream cheese, vanilla extract, and salt and blend until smooth, 20 to 30 seconds. Pour in the eggs and blend for another 10 seconds until smooth. Set aside
For the chocolate cake
Sift the flour, sugar, cocoa powder, baking soda, baking powder, salt, and cinnamon directly into the bowl of a stand mixer fitted with a paddle attachment, or a large bowl for use with an electric handmixer. Mix on the lowest setting until just combined, then add the softened butter and continue mixing on low speed until the mixture resembles wet sand. Stop the mixer and scrape down the sides of the bowl if needed.
In a liquid measuring cup, combine the coffee, buttermilk, egg, and vanilla extract, then slowly pour it into the flour-butter mixture with the mixer running on low. Scrape down the sides of the bowl and beat the mixture on high for a full minute.
Pour the cake batter into the prepared bundt pan, smoothing out the top with an offset spatula or spoon. Carefully ladle in the flan so you disturb the cake batter as little as possible. Transfer the bundt pan to the prepared roasting pan. Grease a piece of foil and place it greased side down onto the bundt pan, folding it over the edges to loosely seal it. Transfer to the oven, then pour water (from the tap is fine) into the roasting pan to come up 2 to 3 inches. 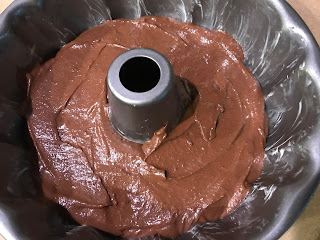 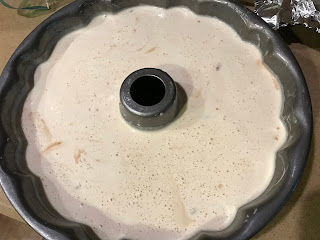 Bake for 2 hours to 2 hours 15 minutes, checking for doneness after 1 hour 45 minutes, using a skewer inserted into the cake to make sure it’s baked through, with little to no crumbs sticking to the skewer when you pull it out. (My cake was done after 1 hour and 45 minutes.)
Carefully remove the bundt pan from the roasting pan and let it cool to room temperature before placing it in the fridge to cool completely, at least a couple of hours. 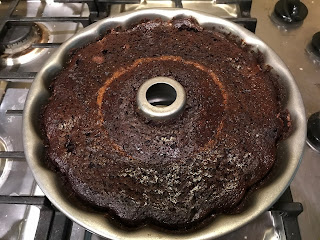 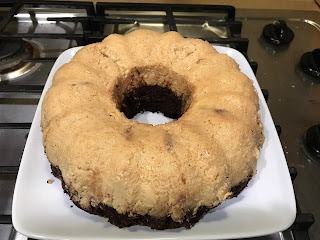 To serve
Once you’re ready to serve, carefully run a knife around any edges that are still sticking, then invert onto a serving platter, gently shaking it up and down if it’s being difficult. If desired, serve with dulce de leche with whipped cream and a sprinkle of cinnamon. (I gave mine a dusting of cocoa instead, to hide imperfections.) 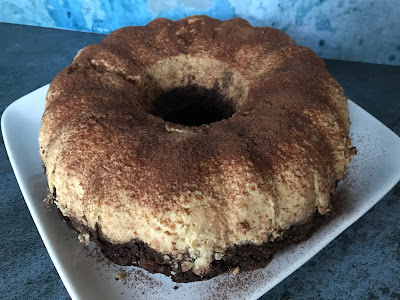 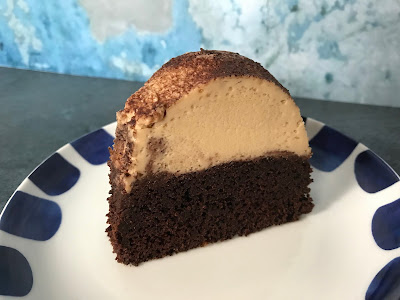