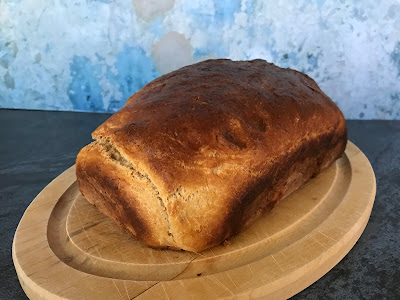 When confinement started last March, I didn’t go crazy baking bread, though that was in large part because there was no flour to be found in stores. Once I found some, I baked a few loaves, trying to tweak the recipe to get it just to my liking. I was using the famous no-knead bread recipe and Ricardo’s crusty white bread recipe, using tips from the former to adapt the latter (definitely put parchment paper in your Dutch oven!) and lowering the temperature and baking time gradually to get a more pleasing crust. (I can tell you that starting with a room-temperature Dutch oven, baking at 450 °F for 40 minutes covered, then 15 minutes uncovered, yielded a bread that was too crusty for my liking, but lowering the temperature to 425 °F and baking for 30 minutes covered, then 15 minutes uncovered goes too far in the other direction.) Plus, I resented the long rise time. These easy rolls are also decent if you want something smaller and much quicker, but they didn’t quite hit the spot for me. 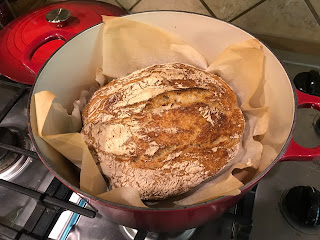 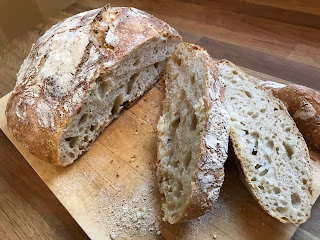 Then more recently, I tried honey-wheat bread. It’s from Parents magazine and it’s the kind of recipe you can make with young kids, who will love kneading dough, and older ones, to whom you can explain that fermentation causes the air bubbles and makes the dough rise. Yadda yadda yadda. I didn’t make it with my kids because I just don’t have the patience right now. I started by reading these tips on how to make whole wheat bread softer and fluffier, but I only made one change to the recipe: using white whole wheat flour instead of regular whole wheat. I didn’t add vital wheat gluten to this recipe (I don’t want to purchase something that I would use so rarely), but it already calls for some all-purpose flour and honey, all of which help make it soft.
This bread was absolutely delicious! It was by far better than the no-knead loaves I had made, both in flavor and in texture, and perhaps I’d just check on it a few minutes earlier next time to get a more-golden-than-brown color. I baked two loaves in loaf pans (super original, right?) because I wanted them to have a nice shape rather than bake up on a baking sheet, and even though they came out of the pans without incident, it was a close call and I’ll line the pans with parchment paper next time. I froze one loaf whole, and later ate it without incident, but next time I might slice it first.
Note that I used the amount of flour specified by weight, i.e. 500 grams of each kind. In my book, that would be a heaping 4 cups, but the original recipe said 2 cups – I don’t know how they did their math, but using the weight amount turned out wonderful bread, dense yet still soft on the inside with a slightly crisp crust. Toasted and buttered, this was heaven!
16 g (3 tsp.) instant yeast
600 g (21 oz) warm water
500 g (see above) all-purpose white flour, plus more for your work surface
500 g (see above) white whole wheat flour
20 g (4 tsp.) salt
50 g (¼ cup) neutral vegetable oil
120 g (½ cup) honey
1 egg
2 Tbsp. lactose-free milk
Mix the yeast and water in a bowl. Once the yeast starts to make bubbles, top it with both kinds of flour, then the salt (honestly, I mixed all my dry ingredients together properly first). Add the oil and honey. Mix by hand or in a stand mixer fitted with the dough hook attachment, until the dough is wet but firm.
Let the dough relax in the bowl, uncovered, for about 30 minutes, so the flour can absorb the water a bit, making it easier to knead. Then sprinkle some flour on your countertop and scrape the dough out onto it.
Using the heels of your hands, push forward into your dough to stretch it. Then, pull it back toward you, folding it in half. Give it a quarter turn and repeat the process. Keep kneading until you can feel that the dough has tightened up and gotten smoother, usually 5 to 10 minutes. Pop your dough back into the bowl, put a floured towel on top (I didn’t bother, less laundry that way), and allow it to rise for 90 minutes (I do this in the microwave, with the door ajar).
Divide the dough in half and place each in a parchment-lined loaf pan (mine are 9”x5”). Let it rise for another hour, or until pressing it with your finger leaves an indent.
Preheat the oven to 375 °F. Whisk together the egg and the milk; brush the mixture on top of the dough.
Bake loaves 40 to 45 minutes (I’d check a little earlier than that next time). Loaves should be golden brown and sound hollow when thumped with your fingers. Cool on a wire rack for 30 or more minutes. 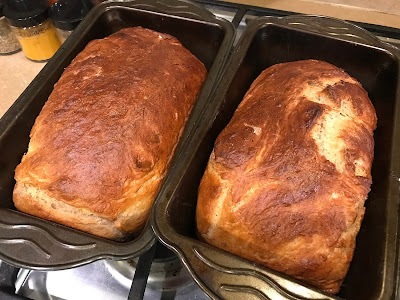 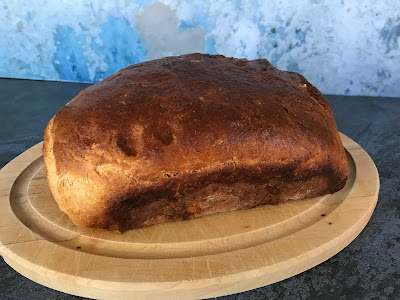 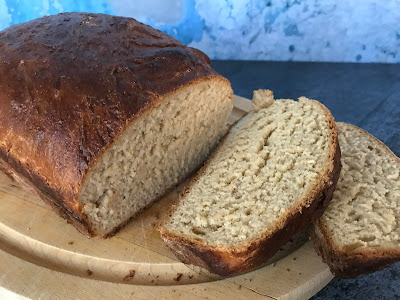