I made a few more of Jessica Seinfeld’s recipes. In her first cookbook, Deceptively Delicious!, there is a recipe for breaded chicken nuggets (I make them into strips) where you essentially replace the beaten egg with vegetable purée. So you dredge the chicken in flour, dip it in purée, then roll it around in breadcrumbs (a mixture of whole wheat breadcrumbs and flaxseed). I like to cook them 20 minutes at 425 °F instead of pan-frying them, and the Little Prince usually likes them. I recently served them with sabzi, a mix of red bell peppers, potatoes, and onions that we grown-ups really liked.

From her second cookbook, Double Delicious!, I made her turkey meatloaf, which calls for ½ cup carrot purée and ½ cup cauliflower purée, and was actually quite good. Then I tried her sweet and sour meatballs, which call for broccoli purée. So, here’s the thing: I found them too soft, and I didn’t think that the yogurt brought anything here. Now, I’m not an expert on ingredient ratios in meatballs, but I wonder if simply omitting the yogurt would kill two birds with one stone and allow me to serve something closer to what I had envisioned. I also thought that the sauce was okay, but was not what I have in mind when I think “sweet and sour sauce”, so you could consider taking a shortcut and serving them with storebought sauce, maybe even barbecue sauce. Also, she has you preheat the oven but then never uses it in the recipe! I prefer to cook meatballs in the oven rather than in a pan, so the directions below are mine. Finally, the original recipe called for making meatballs ½” in diameter, but frankly, I’ve seen pollen that was bigger, so I used 1 tablespoon of mixture per meatball. I wonder if all this is why I can’t find a link to this recipe online, like it just needed to be reworked a little before being public…
I served them with parsley leaf potatoes, but Jessica Seinfeld suggests egg noodles and vegetables.
For the meatballs (note that I doubled the recipe and got 61 meatballs)
1 Tbsp. olive oil
1 small onion, finely chopped
2 cloves garlic, minced
2 slices soft whole-wheat bread, crust removed, torn in pieces
½ cup lactose-free plain yogurt (I would omit that next time)
½ cup broccoli purée
1 large egg
½ lb. ground chicken or turkey (at least 90% lean)
½ tsp. salt
½ tsp. nutmeg
¼ tsp. pepper
For the sauce (see note above)
2 tsp. olive oil
1 medium onion, chopped
2 tsp. firmly packed dark brown sugar
½ cup low-fat, reduced-sodium beef broth
1 Tbsp. ketchup
2 tsp. steak sauce
¼ cup crushed pineapple in natural juice, or ¼ cup fresh puréed pineapple
1 Tbsp. orange marmalade
Preheat oven to 400 °F. Line a baking sheet with aluminum foil and grease it lightly with nonstick cooking spray.
Heat the olive oil in a large skillet over medium heat. Add the onion and cook 7 or 8 minutes, stirring often, until the onion softens. Add the garlic and cook 1 minute more, until the garlic is fragrant.
Place the bread in a large mixing bowl with the cooked onion and garlic, yogurt, broccoli purée, egg, chicken, salt, nutmeg, and pepper. Beat with an electric mixer on medium speed until smooth (I just stirred with a fork). Form into meatballs, using about 1 tablespoon of mixture per ball. Place onto the prepared baking sheet.
Bake for 15 minutes or until cooked through.
Meanwhile, prepare the sauce. Heat the oil in a small saucepan. Add the onion and sugar. Cook 7 or 8 minutes, stirring occasionally, until the onions are soft and slightly browned. Add the remaining ingredients and bring to a boil, cooking 1 minute more. Purée with an immersion blender or transfer to a food processor and blend until smooth. Pour over the meatballs and serve. 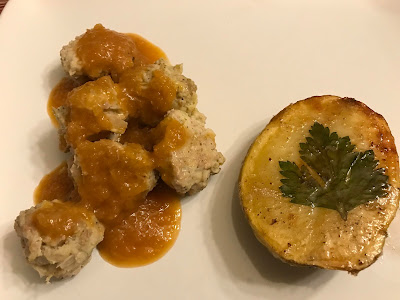 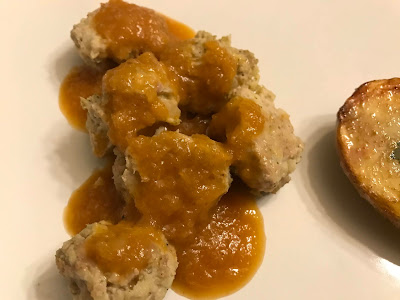