I made this recipe from The Kind Life because I had a large can of pears to use up. So I switched things up a bit to accommodate what I had on hand and to make things easier on myself… In each of my 6 serving glasses, I used 3 Nilla wafers and one half of a small canned Bartlett pear, which I had chopped up in little cubes. Then, in the cashew cream, I used up the pear juice from the can (about ¾ cup) and topped it up with apple juice (¼ cup) instead of using white grape juice. Next time, though, I would add maple syrup in the cashew cream, because I felt it was too bland, though it’s obviously a good option if you want something that is nearly sugar-free. I also omitted the garnishes. I liked this dessert, but I think I’d need to tinker with it a bit to love it. The Little Prince liked the Nilla wafers, though he would only eat them if they had been cleared of any non-Nilla wafer debris, so I guess overall he wasn’t fond of this!

You could also soak the cashews overnight instead of boiling them; that being said, boiling cashews turns out to be a great time-saver if you’ve forgotten to soak them ahead of time! This would also be good with apples, though I think I’d cook the apples a bit first. – maybe I’d soften them directly in the apple juice as it heats. Instead of agar agar, you could use kudzu or even corn starch (if you don’t mind a cloudy appearance), or I’d consider fruit pectin.

Heat the apple juice and whisk in the agar agar. Simmer until agar agar dissolves.

Crush the biscuits and place in dessert glasses. Layer the chopped pears over the biscuits. Pour the apple juice jelly over the pears slowly and put in the fridge to set.

Blend the cashew nuts and grape juice together, adding the juice slowly until the mixture becomes thick and creamy. (Taste and add maple syrup if necessary.) Pour cashew cream over the top of the trifle and garnish as you see fit. Serve immediately or store in the fridge for up to a day. 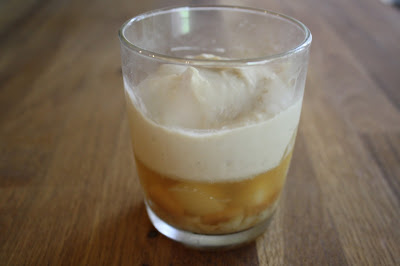