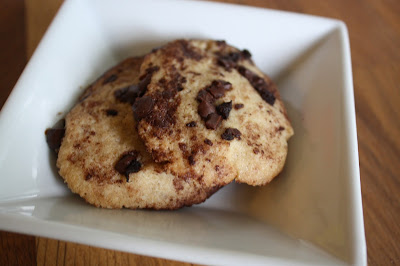 I like shortbread in theory, but I don’t use much butter now that I’m lactose-intolerant, and shortbread just isn’t quite the same with vegan margarine. Now that I know Natrel makes lactose-free butter (!), you can be sure I’ll make good use of that on my next trip to Canada, but in the meantime, I make do with margarine. I think that’s basically why I ended up not posting about these black sesame sablés, which turned out a bit dry and bland.

Nonetheless, I decided to try my hand at chocolate-ginger shortbread cookies, making some substitutions in the ingredient list along the way (because I was afraid that otherwise, I’d never get around to making them). This recipe is from Gluten-Free Girl. It was originally gluten-free, and you can use gluten-free all-purpose flour where I used wheat flour (white whole wheat, to be precise); Shauna James Ahern recommends a mixture of sorghum flour, sweet rice flour and potato starch for this particular recipe. The other change I made was to make two rolls out of the dough instead of four, because I feel like they crumble less that way (I probably slice them a bit thicker than recommended for that reason, too). I got a yield of about 32 cookies in all.

These cookies were really delicious! I love that they were a bit out-of-the-box, in that you can’t predict what it’s going to taste like just by looking at it, but the flavors went really well together.

Put the margarine into the bowl of a stand mixer. Run the mixer until the margarine is creamy. Add the sugar and salt and cream together until the mixture is light and fluffy, about 2 minutes. Add the egg yolks, one at a time, mixing until each one is incorporated. Add the vanilla extract, the vanilla seeds, and the orange blossom water. Mix, scraping down the sides of the bowl as necessary.

Whisk together the all-purpose flour, white rice flour, cornstarch and psyllium husk. Slowly add the dry ingredients to those in the stand mixer and mix until the flour is fully incorporated (the dough will look dry at first, but as you let the mixer run, it will come together).

Remove the dough from the bowl and divide into 2 equal parts (see note above). Form each half into a log about 10-12 inches long. Wrap each log of dough in wax or plastic paper and refrigerate for at least 4 hours or overnight.

Combine all ingredients on a large plate and set aside.

Preheat the oven to 325 °F. Cut each dough log into about 20 discs (I made about 16). Firmly press each disc into the cocoa mixture (you can also sprinkle extra cocoa mixture on top of the cookies). Place discs cocoa-side up on a baking sheet lined with parchment paper or a silpat.

Bake the cookies until they start to be firm to the touch and golden brown, about 15 to 20 minutes. Allow to cool before eating; once cool, store in an airtight container. 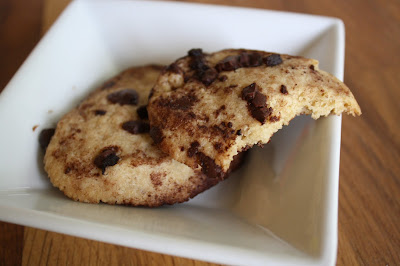