Gingerbread for a panzanella

I decided to adapt a roasted squash and gingerbread panzanella recipe from Williams Sonoma. It was very good, but the gingerbread that I made for it (using their recipe) was fantastic, and that’s really the recipe I want to share today. Sadly, I only got a blurry picture of the cake, since I was only thinking about photographing the salad, not its components… We actually enjoyed it more as cake than as croutons, and we kept sneaking small slices off of it over the course of a few days. I used sorghum syrup to make it, which has a taste not quite as strong as molasses, but those would make a fine substitute if you can’t find sorghum syrup. Note that for the flour, I used the weight amount specified, even though it doesn’t match up with the volume (2 ½ cups of all-purpose flour should be somewhere around 300 g. in my book).

In a medium bowl, whisk together the flour, baking powder, salt, and spices. Set aside.

In a small bowl, whisk together the boiling water, sorghum syrup, and baking soda. Set aside.

In the bowl of an electric mixer fitted with the flat beater, beat the margarine on medium speed for 30 seconds. Add the brown sugar and beat until fluffy, about 2 minutes, stopping the mixer occasionally to scrape down the sides of the bowl. Add the egg and beat until combined.

Reduce the speed to low and add half the sorghum mixture, then half the flour mixture, beating after each addition until just combined and stopping the mixer to scrape down the bowl as needed. Repeat to add the remaining ingredients.

Pour the batter into the prepared pan. Bake until the gingerbread springs back when touched, about 35-40 minutes. Transfer the pan to a wire rack and let cool completely. 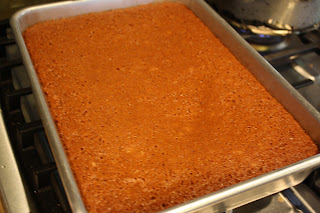 From here, if you choose to make the panzanella, toast gingerbread cubes in a 400 °F oven for 7-8 minutes, turning once, until slightly crisped. Add to arugula, cooked crumbled bacon, roasted squash, and quick pickled onions. Make a dressing with olive oil, lemon juice, pumpkin butter, and salt and pepper to taste. I’m thinking pepitas would be a nice touch here! 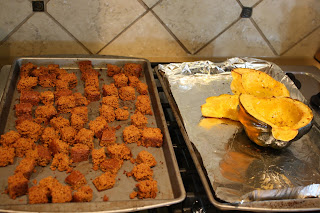 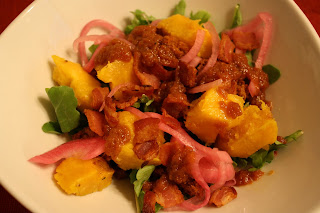