I haven’t talked about it here, but I’ve had trouble with my teeth lately. I ended up with two crowns and a root canal on my lower left molars this fall. These weren’t my first crowns, so I knew what to expect. As it turns out, I can think of no better way to start “mindful eating” than by getting a temporary crown! You always have to pay attention to what you eat and how you eat it, and you often end up eating less overall. Anyway, that’s the reason I haven’t made granola in so long! My teeth were just too sensitive for it, so I’ve been more into oatmeal. My go-to is still this one, though I now make it with coconut milk. So I tried triple-coconut quinoa porridge from the same book, Whole-Grain Mornings. That particular recipe didn’t satisfy me as much as oats would have, though.

So when I saw coconut and ginger oatmeal on The Kitchn, I decided to try that as well. And it was wonderful! It really hit the spot. I only topped them with fruit, no nuts or seeds (as I was still recovering from my emergency dental procedures). I think this would be great with raspberries, too. The picture is poorly lit because mornings are dark now – maybe someday I’ll take myself more seriously and plate dishes in the middle of the day just for show. Until then, you’ll have to make do with a great recipe.

Bring the water and coconut milk to a boil over high heat in a medium saucepan. Stir in the oats, ginger, and salt, and return it to a rolling boil. Reduce the heat to low and simmer, stirring occasionally and scraping the bottom of the pan, until the oats are very tender and the oatmeal is as creamy as you like it, 20 to 30 minutes. Serve immediately in bowls topped with coconut flakes, pepitas, and pomegranate seeds. (You can also save some in the fridge and reheat it before serving, perhaps adding a bit more liquid as needed.) 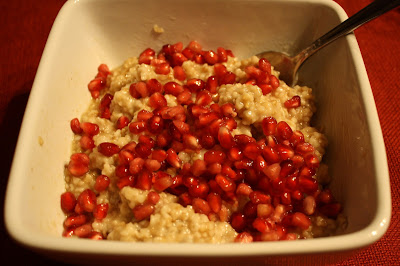