This recipe was developed by Soy Vay, a company started by a Chinese woman and a Jewish man who bonded over their love of Asian flavors (and what a perfect name!). They make marinades, sauces and dressings, among other food items. I confess I didn’t use their brand of teriyaki marinade, since I already had another brand in the fridge, but the latkes turned out very well nonetheless. I’d just make one modification to the recipe: I wouldn’t soak the grated potatoes, because it relieves them of starch that would be wanted in latkes and it makes for that much more water to wring out (the wringing step wasn’t written in the recipe, but I’ve made enough latkes to know it’s essential!). That being said, I liked the step of chopping half the potatoes, which gave the latkes some bulk without making them too dough-y. The version below is my adaptation.

Surprisingly, as we were eating these, the Engineer said, “I love it when you make classic latkes!” It turns out that the teriyaki sauce wasn’t very present, and perhaps it just contributed a touch of umami to the latkes, because they did taste pretty classic. In any event, we really liked these! I served them with Asian cucumber salad and green beans.

In a large bowl, mix the potatoes with the onion, eggs, teriyaki sauce, salt, pepper, baking powder, and flour. If too much liquid accumulates in the bottom of the bowl, add flour as needed.

In a large frying pan, heat some vegetable oil over medium heat. Spoon some of the potato mixture into the hot oil and press down lightly to flatten. Fry until golden brown, about 4 minutes per side. Set aside on a plate lined with paper towels and repeat with remaining potato mixture. 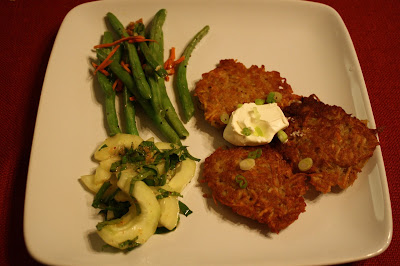 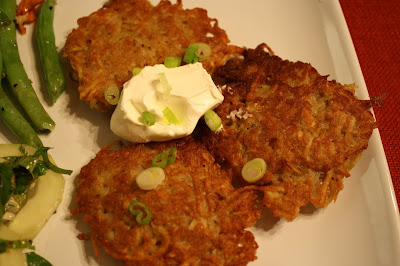