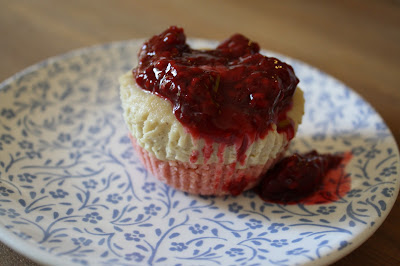 I made these little cheesecakes using a recipe from Nutritious Eats. They’re made with cashew cream and coconut milk (unlike my first version, which called for coconut oil). They tasted absolutely delicious! I think the coconut milk gave them a creamier mouthfeel. I served them with a raspberry sauce because I had raspberries left in the freezer, but these would be just as good with blueberries or strawberries, in my opinion. These cashew cakes called for the “typical” crust made with nuts and dates, but I wanted to use up the last of my biscuits roses de Reims, so I improvised a crust with those instead. I’m giving you the nut version below, though, because I didn’t use exact proportions – I was really trying to use up all the cookies, and it was a bit too much anyway.

To make the crust, place almonds, dates, vanilla extract and water in a food processor. Start pulsing and then blend together on high speed until mixture starts to come together (it will pull away from the sides and form a big hunk). Scoop 1 tablespoon of the mixture into each paper liner. Press down evenly to form a flat crust. Set aside.

To make the filling, add soaked cashews, coconut milk, maple syrup, lemon juice and vanilla extract to the bowl of a food processor. Blend for 1-2 minutes on high speed or until smooth and creamy. Scoop ¼ cup of batter and add onto each crust. Refrigerate overnight if possible or until firm.

To make the sauce, place the raspberries, lemon juice and sugar in a small saucepan. Cook on medium-low for about 15 minutes, stirring occasionally. Set aside to cool. (This can be made ahead of time and kept in the fridge to firm up a bit.)

When ready to serve the cheesecakes, top them with a spoonful of raspberry sauce. 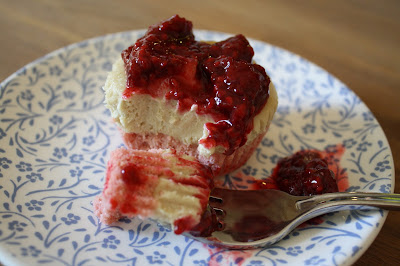