I wanted to make Nanaimo bars recently. I used this vegan recipe, but it was such an utter failure that I threw most of it away. The consistency was all wrong, I couldn’t get the three layers to set up properly, and it was a complete mess. It didn’t even satisfy my craving for Nanaimo bars, since it was so different from what it should have been! So I ended up making my friend Jen’s Nanaimo bars, since I knew her recipe worked. What was surprising was that her ingredients are very similar to those of the first recipe I tried, and yet the results were completely different! This recipe works, though, take my word for it.

The recipe calls for custard powder, which I don’t normally keep on hand, but it’s worth buying it for this. It’s actually corn starch-based and egg-free and contains just a bit of natural yellow coloring. You *could* replace it with vanilla pudding mix, and maybe throw in a drop of yellow food coloring for show, but I prefer the custard powder. Also, you could replace the egg in the base with flaxseed meal and water, and that way the dish would be entirely egg-free (assuming your graham crackers are egg-free as well).

For the base
Grease an 8-inch square pan; lay a piece of parchment paper in it so that it overhangs, then grease again.

In a large microwavable bowl, microwave margarine until melted. Blend in sugar, cocoa, egg, and vanilla. Microwave uncovered for 1 minute, stirring after 30 seconds – the mixture should be roughly the consistency of custard (I think I accidently skipped this second step in the microwave, because I was actually using a double boiler for this). Add graham cracker crumbs and coconut and stir well. Press into the prepared pan and chill.

For the filling
Mix all the ingredients well. Spread filling evenly over base. Chill for 15 minutes.

For the glaze
Microwave chocolate and margarine on medium for 2-3 minutes, until melted, stirring after each minute (again, I did this in a double boiler because I didn’t want the chocolate to burn). Let cool for 10 minutes. Pour glaze over filling. Tilt pan back and forth so that glaze coats evenly. Chill. Cut into squares and serve. 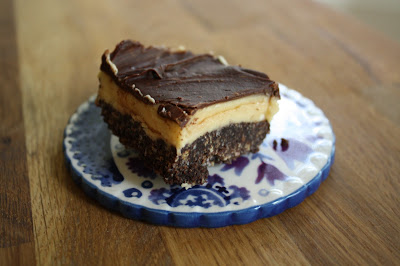 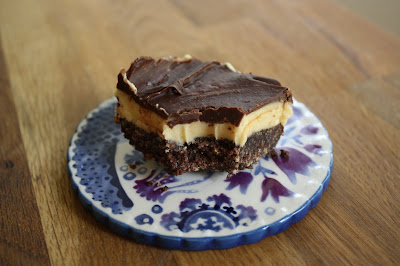 I have just omitted the egg entirely, no substitutions. Custard powder was invented by a guy whose wife was allergic to eggs! Also I've subbed soy milk or even water for the milk.

Awesome! So it can be made vegan. I was afraid of suggesting too many substitutions because I didn't want my recipe to end up like the first one I linked to (the vegan one that didn'T work at all). These were great, though!

Would this work with a milk alternative such as almond milk?

Absolutely! I’ve even just used water for the milk -it’s really just to get the icing to the right consistency.