I adapted this pumpkin tortilla soup recipe a bit because I didn’t want to deep-fry anything. I also used 4 cups of broth instead of 5. It was delicious! I think this is a great soup for fall and winter, as it is hearty and warming. It would be perfect for the cooler weather we’re having this week. (Another great option, for non-vegans, would be this leek, potato an bacon soup with cheddar – just saying.) Note that I didn’t make mine spicy, using only a pinch of Korean pepper instead of crushed dried peppers.

Cut 6 of the tortillas into ½-inch squares.

Heat vegetable oil in a large saucepan over medium-low heat. Add onion, garlic, cilantro, and tortilla squares and cook, stirring frequently, until onion is soft. Add cumin and crushed peppers or cayenne and sauté for another minute.

Add pumpkin, tomatoes, vegetable stock, and salt and stir to combine. Bring to a boil. Cover, reduce heat, and simmer for one hour.

While the soup is simmering, cut the remaining 6 tortillas in half and then into ¼-inch-wide strips. Pan-fry them in a little oil (instead of deep-frying them) until they are crisp and golden. Set aside on a plate lined with paper towels.

To serve, ladle soup into bowls and garnish with tortilla strips, avocado, and cilantro. 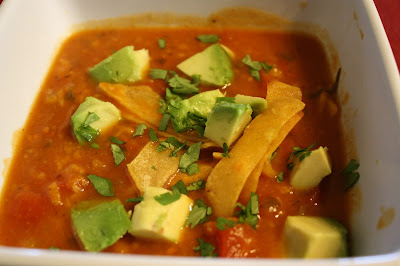