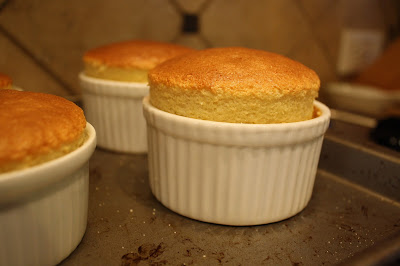 That’s right, another molten cake recipe! This one is original, though, and uses tonka beans, with which I’ve fallen in love. I hope you’ll allow me a side note about tonka beans, even though it’s repetitive for those of you who have read my explanation in French in the post to which I just linked: tonka beans contain coumarin, which can be poisonous in high doses (according to Wikipedia, that would be about 275 mg/kg). So the FDA has banned merchants from selling it for use in edible goods, despite the fact that cassia also contains coumarin – and Lord knows Americans love their cassia! In any event, I bought mine online from what turned out to be a Wiccan supply store (had I been in Montréal, I would have bought them at Épices de Cru). I slightly reduced the amount in the recipe as well, just because I want to make my tonka beans last longer in my pantry! I’d say they have more of a scent than a taste, and they are somewhat reminiscent of vanilla and nutmeg, but different at the same time. I really love using them!

This recipe from Dessert First originally called for raspberry liqueur, but I know the Engineer doesn’t like raspberries, so I omitted it. What I really liked, besides the tonka beans, was the molten dark chocolate center in the middle of what is essentially a white chocolate soufflé. (Some molten cakes are wet in the center because they are under-baked, and some have ganache in the center, as is the case here. Some chefs will fight to the death over which is the proper way to make molten cakes, but I’m not going there.) That being said, I ended up not really liking the taste of the dark ganache here (it wasn’t bad, it just wasn’t exciting at all and was a bit too hard to work with properly), so I’m substituting the scaled-down recipe from the truffles I recently made below. These soufflé cakes were fantastic! We absolutely loved them. I preferred eating them warm (instead of hot or cold). If, like the Engineer, you insist on eating them cold (or making them in advance), then please unmold them while they are still warm and store them in the refrigerator after they’ve cooled a bit. You can give them a dusting of powdered sugar if you wish.

For the ganache
Melt chocolate with coconut milk in a small metal bowl set over a pot of simmering water, stirring occasionally. Remove from heat. Stir in vanilla, if using. Let come to room temperature, then refrigerate until firm.

For the vanilla tonka bean cake
Meanwhile, combine white chocolate and butter in a large bowl and set over a pot of simmering water. Heat, stirring occasionally, until melted and combined.

Place egg whites and cream of tartar in bowl of a stand mixer. Whisk on medium speed until whites are very foamy. Add sugar and whisk on high until glossy soft peaks form.

When you are ready to make the cakes, preheat the oven to 375 °F. Prepare individual ramekins by buttering and sugaring the insides. (This recipe makes about ten 4-oz ramekins. I made them in two batches, a day apart.)

Fill the ramekins about 90% full. Do not fill all the way to the top as the batter will puff up and may overflow. Place about a truffle-sized scoop of ganache into the center of each ramekin and press in slightly just so it's covered by the batter.

Bake for about 17-18 minutes (bake one first as tester to see what the consistency is after 17 minutes - you don't want to overcook these cakes). The tops should be just springy when you pull them out.
Run an offset spatula or knife around the sides to loosen the cake. Place a plate over the top of the ramekin and invert cake onto plate. Serve immediately. (I let them deflate a bit before inverting and serving them.) 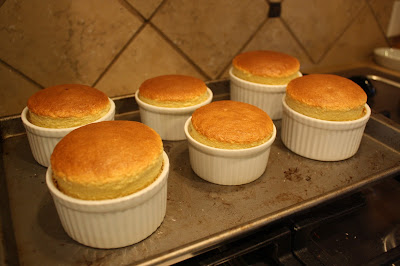 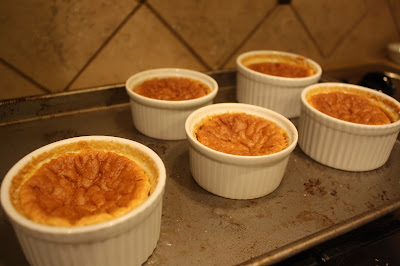 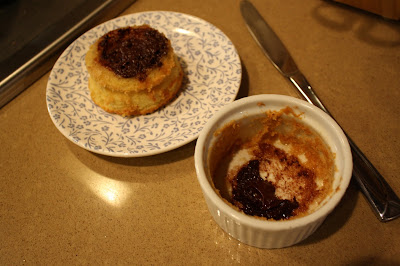 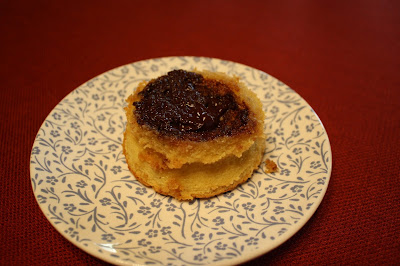 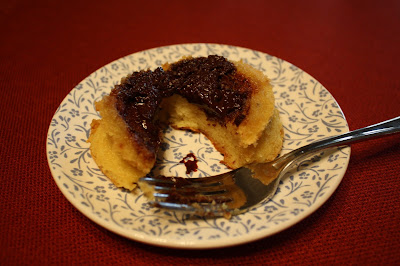 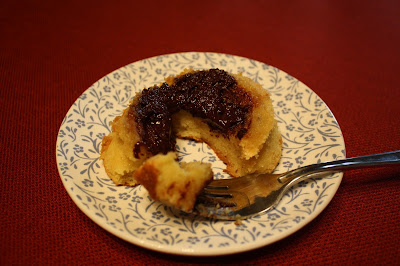