I’ve made some sandwiches I never told you about, but I liked them enough that I need to rectify that. First, there was a modern BLT with white bean-wasabi hummus, which I made for lunch. At the time, the Little Prince was perfectly happy with eating the components of a sandwich, which made this a great choice. Now, though, he wants to eat a sandwich like everybody else, which makes the handling a bit more complicated. In this case, I could have chopped the bacon in small pieces, and the hummus probably would have helped to hold everything in place, so this would still be a good choice. I reduced the amount of wasabi in the hummus, since I don’t like it spicy to begin with, and I’d consider omitting it entirely in the next iteration (though you could replace it with whatever pepper flakes strike your fancy).

Whirl beans with garlic, oil, lemon juice, wasabi and salt in a food processor until smooth. Set aside.

Heat a large non-stick frying pan over medium-high. Cook bacon until crispy, about 3 min per side.
Spread a layer of hummus on 4 slices of bread. Top each with edamame, cucumber, bacon and tomato, and sandwich with remaining bread. 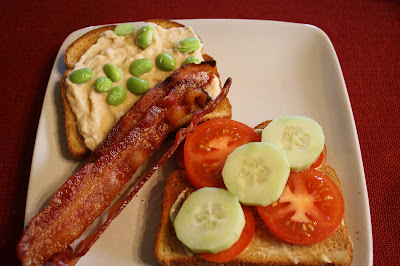 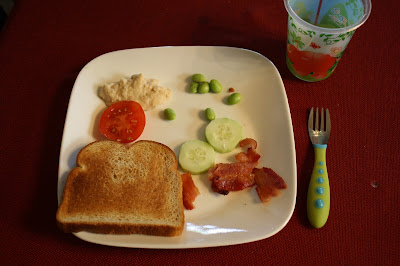 This was followed by two types of chicken sandwiches that I made for dinner. The first was Margaux curried chicken sandwich, which was once Oprah’s favorite sandwich in America. I followed the recipe initially, but I have come to the conclusion that the chicken must be chopped in order for this to be pleasant to eat. It tasted wonderful, though, so I’d make it again. Note that the chicken filling will give you lots of leftovers and makes for a great curried chicken salad (otherwise, reduce the quantities by about half).

In a large saucepan over high heat, add peppercorns, bay leaves, cloves, lemon and 14 cups water; cover and bring to a boil. Add chicken and cook, uncovered and stirring occasionally, 7 to 10 minutes, or until cooked through; drain. Once cool, chop the chicken into smaller-than-bitesize pieces.

In a large bowl, combine mustard, honey, curry powder, pepper and salt; stir in chicken. Cover and refrigerate at least 30 minutes, or up to 1 day.

Butter both sides of bread slices. In a heated nonstick skillet over medium-high flame, cook bread in batches 3 to 5 minutes or until browned, turning once. 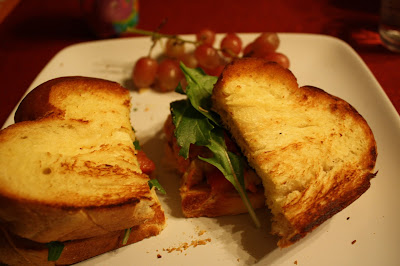 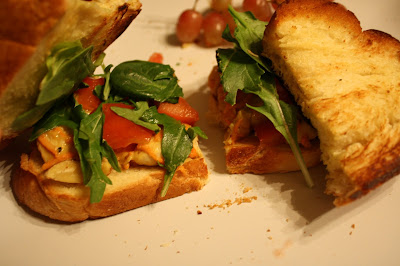 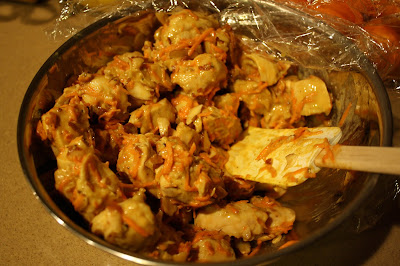 Finally, the second chicken sandwich I made was a chicken BLT from Coup de Pouce, in which the bacon was chopped and stirred into the mayonnaise – delicious! I doubled the amount of chicken but left all other ingredients the same.

In a large bowl, whisk together 3 Tbsp. olive oil with the lemon juice, mustard and thyme. Add salt and pepper to taste. Add the chicken and turn it over so that it is well coated in marinade. Let marinate for 10 minutes.

Meanwhile, in a small bowl, mix the mayonnaise, garlic and bacon. Add a dash of pepper and set aside.

Preheat the grill to medium. Remove the chicken from the marinade and set it on the oiled grill; close the lid. Cook 10 minutes or until the chicken is cooked all the way through, flipping over at the halfway point. (I cooked my chicken in a pan on the stovetop.)

Brush remaining olive oil on the slices of bread and put them on the grill. Cook 2 minutes or until they are golden and lightly crispy, flipping them over at the halfway point.

Spread some mayonnaise on the slices of bread. Garnish half with chicken, tomatoes and arugula. Cover with the other slices and serve. 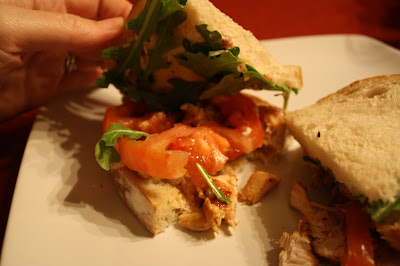 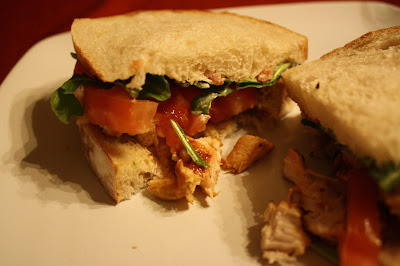