Last fall, I realized that I had not one, not two, but three recipes for pumpkin cinnamon rolls that I wanted to try. I didn’t want to keep three recipes, though, so I decided to make each one and compare them, hoping a winner would emerge. (I did this over the course of a few months, taking notes and freezing samples for future reference.) Luckily for me, there is a clear winner, so that’s the recipe I’m sharing below!

The first recipe I tried was from Smitten Kitchen. The only change I made was to halve the amount of sugar in the frosting. The recipe made two pans of rolls, so I froze half. I thought they were really good and definitely a contender, despite the fact that they didn’t look as photogenic as I would have hoped… 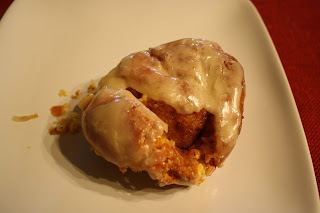 The last recipe I tried happened to be gluten-free (and vegan), and let me tell you, that dough was an effing nightmare to work with. I ended up with what I called buns rather than rolls, because it was just pieces of dough scraped off the counter, shoved in a pan, baked, and schmeared in icing. Basically, I have too much self-respect to ever attempt that one again. 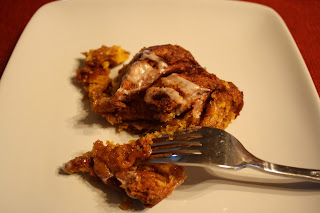 It was the second recipe that turned out to be the winner, producing rolls that are both delicious and aesthetically pleasing. They are actually pumpkin maple rolls from The Nonpareil Baker. They could easily be veganized if you wanted. I would perhaps use less sugar in the filling next time, because this had a few unpleasantly sticky/hard clusters. I also halved the amount of frosting while changing the amounts of extracts, but I think I should have used a bit more than 3 ½ Tbsp. of liquid to get more of a glaze consistency – that’s easy enough to fix. My quantities are below. That being said, a lactose-free cream cheese frosting would be nice, too; you can refer to the Smitten Kitchen link above. The recipe makes 16 rolls. 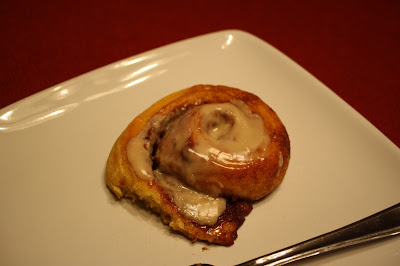 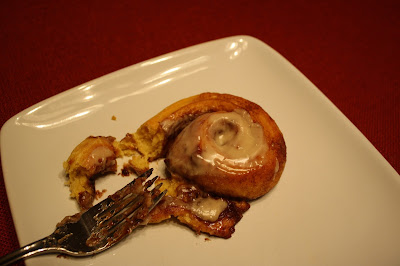 In a large bowl, stir together the yeast, ¼ tsp. granulated sugar, and warm water. Allow to proof for 5-10 minutes, or until the yeast becomes foamy. If the yeast does not foam, discard and start over with new yeast.

To the same bowl, add the warm milk, butter, sugar, salt, and pumpkin purée and stir well. Add the flour ½ cup at a time, until you can no longer stir the dough. Transfer the dough to a lightly floured surface and knead in the remaining flour until the dough is sticky, but does not stick to your hands. I used the dough hook in my stand mixer for this and added flour until I got the right consistency. I somehow only needed 3 cups of flour, which seemed like a ridiculously low amount, but it worked!

Transfer the dough to a lightly greased bowl and cover with plastic wrap. Allow the dough to rise in a warm, draft-free area for about two hours, or until doubled in volume.

While the dough is rising, combine the melted butter and maple syrup in a small bowl.

In a separate bowl, combine the brown sugar, cinnamon and nutmeg.

Roll the dough up as tightly as possible into a log. With a sharp knife, trim about one inch off each end of the log and discard. Cut the log into 16 equal pieces. The easiest way to do this is to cut the log in half, then cut the halves in half, and so on. You can do this with unflavored dental floss, tying it around the log and tightening the knot to cut off pieces with clean edges. Carefully transfer the slices to the prepared pans (12 in the large pan, 4 in the small pan) and reshape if necessary. Cover the pans with plastic wrap. 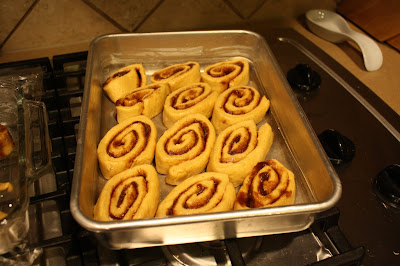 Place a baking dish filled with about 1" of boiling water on the bottom rack of a cold oven. Place the covered pans on the top rack of the oven and allow to rise for about one hour, or until almost doubled in size. (I didn’t bother with the warm water. I recommend putting the rolls in the microwave oven with the door ajar or in another warm place. Note also that you can refrigerate the rolls overnight at this point, which is what I do to have them for breakfast without waking up at 4 in the morning.)

Remove the pan of boiling water and the risen rolls from the oven and preheat to 350 °F. Once the oven is heated, remove the plastic wrap from the pans and bake for 20-25 minutes, or until the rolls are golden brown. (I took my risen rolls out of the fridge while the oven was preheating and I baked them for 25 minutes.)

While the rolls are baking, prepare the glaze. Combine the powdered sugar, vanilla, maple extract, and milk in a medium bowl. Whisk until the ingredients come together to form a thick glaze. Drizzle the glaze over the hot rolls. Serve warm. 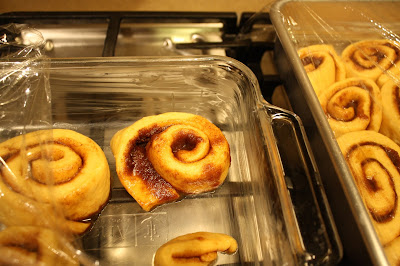 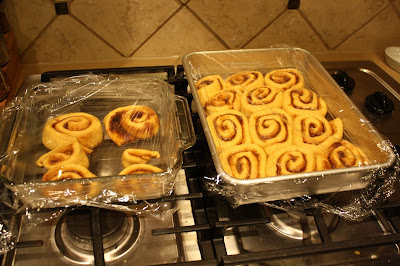 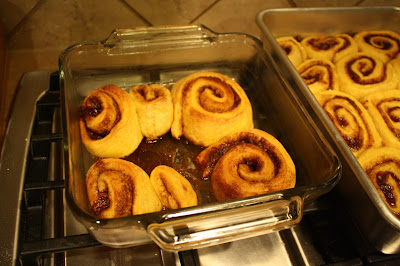 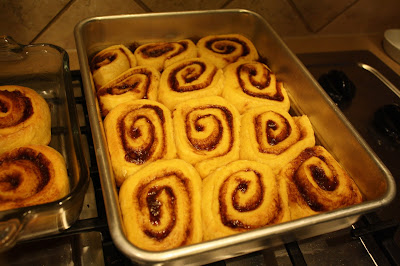 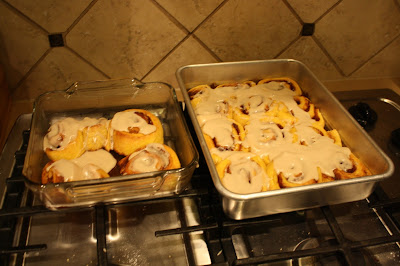 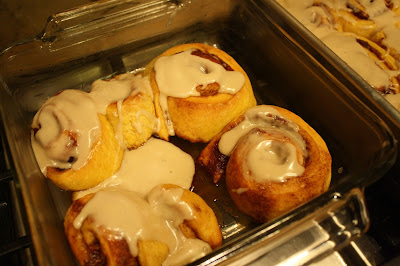