This potato pie is from Gluten-Free Girl. We thought it was delicious, and it’s a really wonderful, warming winter dish (I know that Punxsutawney Phil didn’t see his shadow yesterday, but winter ain’t over just yet). It’s easy to make, albeit somewhat long. The problem I ran into making this recipe was that there was no weight specified for the potatoes, simply “6 large russet potatoes”. So I ended up with “Texas-sized taters” (I’m not even kidding, it said so right on the package), but they weighed about 1 lb. each and that was way, way too much! They weren’t even cooked all the way through after 90 minutes in the oven… I used about half for the pie (and the rest became a side dish for the remainder of the week), so I’m going to write 3 lbs. potatoes total below. Even then, the pie was very good, so with the right amount of potatoes (and concentrated flavor), it would have been really great!

Preheat oven to 400 °F. Pierce the potatoes with a fork and wrap them in foil. Bake until they are soft to the touch, about 60 minutes (for an average-sized potato).

When the potatoes are done, unwrap the foil and run about 1 lb. of the potatoes through a ricer. (This really does give the best texture, although you could mash them if you don’t have a ricer. I ended up getting one because I saw too many recipes like this and I haven’t regretted my investment.) Mix the riced potatoes with the egg; season to taste. Press the mixture into a greased pie plate, making a crust. Bake in the oven until the crust begins to harden and slightly brown, about 20 minutes.

Rice the remaining potatoes and put them in a large bowl. Set a large saucepan over medium heat. Heat the milk and butter until the butter has melted and the milk is simmering. Fold the milk and butter into the potatoes until the potatoes are creamy and the milk is fully incorporated. Season with salt and pepper. Add the cream cheese and olive oil; mix until all is combined. Set a kitchen towel over the bowl and put it in a warm place (for me, that was my microwave with the door ajar).

Set a medium-sized skillet on medium heat. Add the oil and bacon. Render the bacon until the bacon is crispy and the fat is glistening.

Once the bacon is cooked, remove from the pan with a slotted spoon and set aside. Add the onion and garlic into the pan and place it back onto the heat. Cook, stirring frequently, until the onion and garlic are softened, about 5 minutes. Add the thyme. Once you smell the thyme, add the kale and stir it around the pan. When the kale is wilted, and the bacon back in, then fold this mixture into the mashed potatoes along with half of the cheddar and parmesan (save the rest of the cheese for topping).

To assemble the pie, put the mashed potato mixture into the shell gently, without destroying the shell. Top with the remaining cheeses and bake until it has a lovely golden brown color on top, about 10-15 minutes.

Top with green onions and serve. (This can be made a day ahead. To reheat, simple cover with foil and bake at 400 °F for about 20 minutes. I’m throwing in a picture of a slice on its side so you can see how flaky the crust came out – it really works.) 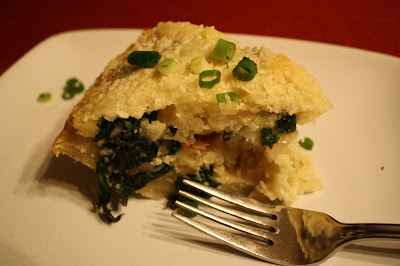 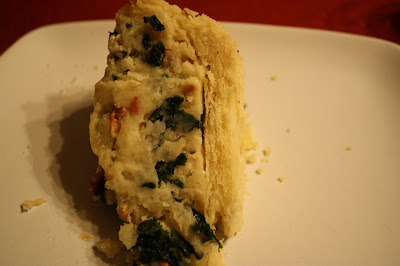