The only spiced nut recipe you'll ever need

I had bookmarked a recipe for maple roasted almonds, but when I decided to make it, I realized that the link is no longer active. I found others online by Googling, but somehow, they didn’t look as good to me as the one I had wanted to make. Luckily, I remembered that I had also bookmarked a recipe for spiced mixed nuts on Orangette, so I decided to try that instead. (It’s originally from Gramercy Tavern, though I’ve never been there.) It was hands down the best mixed nuts I’ve ever eaten, and I won’t be needing those maple roasted almonds in the future. I actually wasn’t sure I’d post this recipe, which is why I didn’t bother taking better pictures, but I’ve decided that it would be a shame not to share it – it’s just so good! The recipe yields about 4 cups, and the nuts should keep about 2 weeks in an airtight container (if you haven’t eaten them all by then). We were grabbing handfuls as we went. These nuts are crunchy, sweet, salty, and full of flavor. 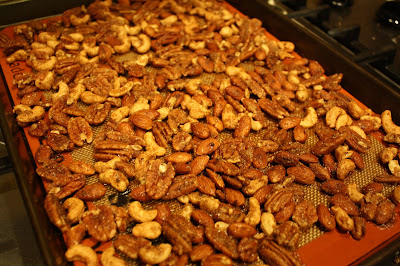 Note that I don’t like spicy/hot foods, so I used a generous pinch of Korean pepper instead of the cayenne pepper. Also, I use Morton brand kosher salt, so the amount I wrote below corresponds to that brand. If you are using a brand with bigger salt crystals (like Diamond Crystal), increase the amount by up to half. To make simple syrup, I combined ¼ cup sugar and ¼ cup water in a small pan and brought it to a boil, stirring, until the sugar dissolved, then I let it cool. I had a bit more than I needed for the recipe – you can always make single servings of lemonade from the leftovers, if you have no other use for it.

Spread the almonds on a rimmed baking sheet, and bake until lightly toasted and fragrant, about 10 minutes. Immediately transfer to a plate, and set aside to cool.

Reduce the oven temperature to 275 ˚F. Line a rimmed baking sheet with parchment paper or a silpat (I recommend the latter, since there is melted sugar involved here).

In a large bowl, combine the almonds, pecans, and cashews. Toss to mix. Add the simple syrup, corn syrup, and grapeseed oil, and stir to coat the nuts. Add the spice mix, and toss gently until the nuts are evenly coated. Spread on the prepared baking sheet. Bake until the spice mixture is caramelized and the nuts are toasted, about 25-40 minutes. (To check for doneness, take a few nuts out of the oven and let cool for a few minutes; if done, they should be dry to the touch.)

Cool completely, then store in an airtight container. 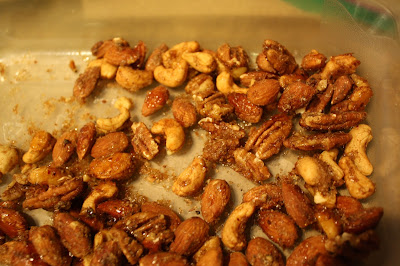