I’m long overdue in posting product reviews, so I did a round-up of what had been piling up – hopefully I didn’t leave anything out!

I’d been approached by Jolly Llama last year to collaborate on a post, but at the time I couldn’t, because I couldn’t find their products in stores near me. I have found them since, though – they are sold in some, but not all, Whole Foods locations. Jolly Llama makes frozen sorbet pops and coconut cream pops that are tree nut- and peanut-free, gluten-free, dairy-free, non-GMO and kosher. I tried their dark chocolate coconut cream pops, and I really like them! I think coconut milk is my favorite plant milk to use in frozen treats, and these were really great. You do need to let the pops thaw a bit before you can push them up the cardboard tube, but it’s worth it! 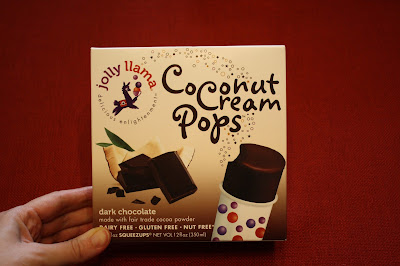 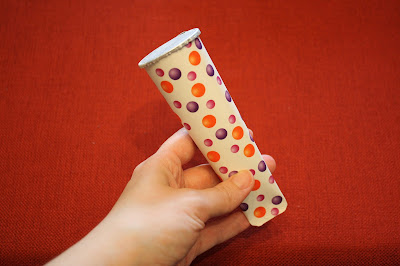 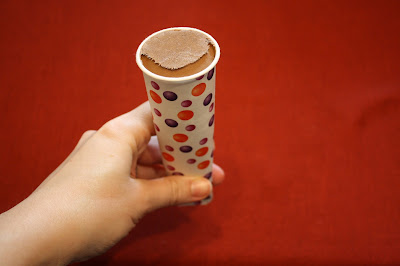 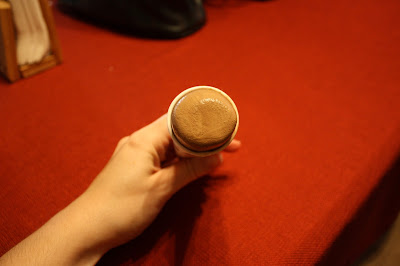 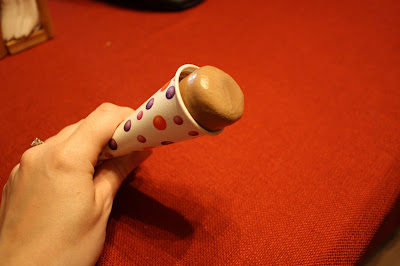 I also tried a So Delicious frozen dessert made with cashew milk, the dark chocolate truffle flavor. I like it, but it’s really frozen solid when it’s straight from the freezer, so I think I prefer their desserts made with coconut milk. The texture is definitely different from that of my maple cashew frozen dessert! 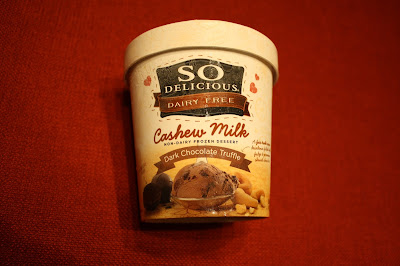 I ordered one of Sirabella’s vegan cheesecake and I have to say, I LOVE it. It is by far the best vegan cheesecake I’ve ever had, and it is even better than some regular cheesecakes! I’m sure that if you didn’t tell anyone, people wouldn’t even notice it’s vegan. (FYI, this is good not only for the lactose-intolerant like me, but also for those who have egg allergies. And vegans, obviously.) Sirabella delivers to the continental US, and with shipping (in an insulated container with dry ice), it comes out to a little over $50 for a cake, which isn’t cheap. These cakes are not as rich as my go-to dairy one, so even though I cut mine into 12 pieces, I’d say perhaps 8 to 10 pieces would be better, especially if you are serving this to guests. I got the plain one and tried it that way as well as with homemade chocolate sauce drizzled on top, and it was great both ways. 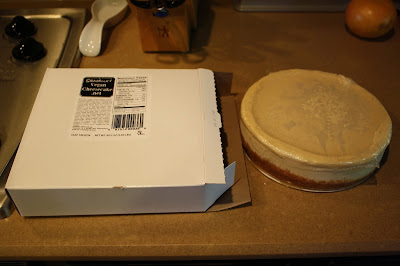 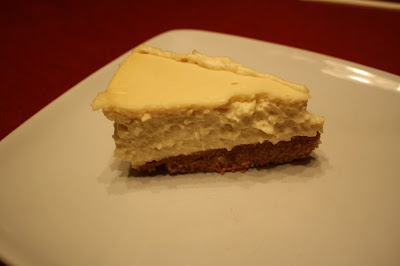 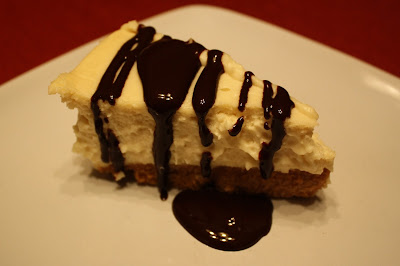 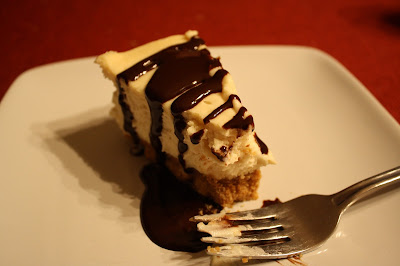 As for chocolate, I tried another few brands. My favorite (that I’ve been buying on occasion since trying it) is Alter Eco’s deep dark sea salt chocolate bar. Alter Eco is one of those companies that makes you feel good about the ethics of your food (certified organic, fair trade, etc.), but this particular chocolate is really good, too. It reminds me a bit of Madécasse in its pleasant, slight bitterness and smooth mouthfeel. And now looking at the website, I realize they have truffles! I’ve never seen those on the shelves, but I’m absolutely keeping an eye out for them next time! 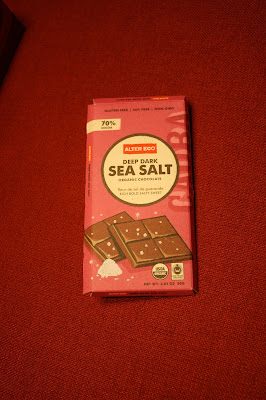 On our vacation to Mexico, I bought a bar of ki’XOCOLATL, specifically the dark chocolate with Lima lime from Campeche and almonds bar. I had tasted it in the display and really liked the lime flavor, but once I had a whole bar, the almonds were more prominent and I didn’t like how many pieces of almond remained in my mouth once the chocolate had melted. Plus, it turns out there’s butter in this chocolate, so it isn’t lactose-free. But hey, it was a nice treat to buy chocolate from a “local” (on vacation) bean-to-bar company! 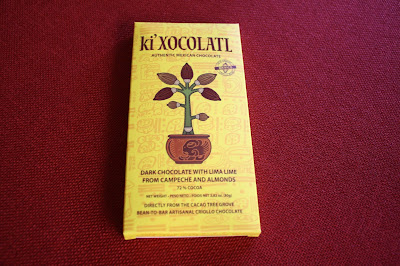 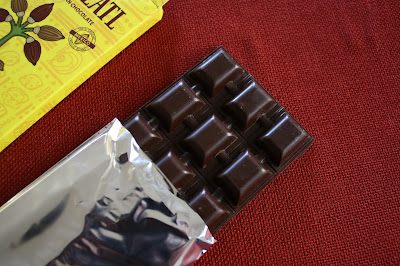 I also tried two of Antidote’s bars, the lavender and red salt as well as the vanilla and cocoa nibs. In both cases, the 84% dark chocolate was too bitter for me, and I was disappointed that the lavender had lavender flowers instead of lavender extract (I find the texture of lavender flowers unpleasant in chocolate). On the plus side, Antidote’s chocolates are vegan, gluten-free, kosher, organic, and fair trade, so that broadens their appeal even if the health factor (antioxidants, raw nutrients, low sugar, etc.) doesn’t do it for you. 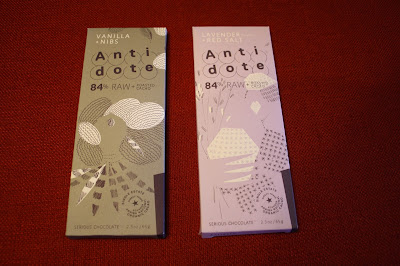 We also tried some more Trader Joe’s products over our visits in the past few months. I get why this store is almost like a religion, they have such awesome stuff! I tried the Greek Whole Milk Yogurt in both Chocolate Mousse and Maple Brown Sugar. Those turned out to have more sugar than I thought (the second one actually had more brown sugar than maple syrup), but they also come in 8-oz. containers, so that was more than a serving for me in both cases. The flavors were great with the tang of the yogurt, so I might get more next time. I tried the (seasonal) Whole Wheat Butternut Squash Gyoza, which also contains edamame, sweet potato and carrots. They were absolutely delicious but, as it turns out, not lactose-free, so I won’t get them again. I will get, however, the Julienned Root Vegetables in the frozen section – those make a great side! It’s a mix of carrots, beets, parsnips and sweet potatoes. They tend to disappear quickly, though; we literally got the last bag. I love Trader Joe’s Creamy Salted Cashew Butter, and I’m definitely getting more of that next time I shop there. Their fully cooked Maple Chicken Breakfast Sausage is great, too, but the last item I really recommend is the Cheddar Cheese with Caramelized Onions – absolutely delicious, and it makes the *best* grilled cheese sandwiches! It’s aged 15 months, so I haven’t had any issues with lactose.

Speaking of cheese, I also tried a Beemster goat cheese recently. The FAQ on the Beemster website actually says that all their cheeses that are aged 4 months or more are lactose-free. I’m not sure if that holds true for ALL types of cheese, but it’s good information to have! I know that I’ve never had a problem with anything 9 months or older, but I don’t remember trying anything younger recently. Well, except this cheese, that is; the packaging specifically said it’s lactose-free, so I trusted it. It’s actually quite good, not “goaty” at all, and it reminds me of the Murcia Curado. Now all I need is a locally available lactose-free fresh goat cheese and I’ll be all set! 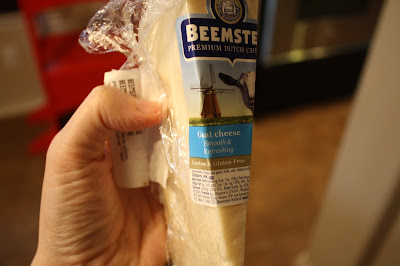 I bought items from a new-to-me company called Soom. They specialize in sesame products. They make very good tahini (which is packaged in a jar like peanut butter and can stay at room temperature even once it’s opened), but my favorite discovery is their chocolate sesame butter. Picture Nutella, but not as sweet, and more nutritious (sesame has some fiber and iron, among other things). It’s vegan and allergen-free – except for sesame, obviously). This is something I’ll be buying again! I’m sorry I couldn’t get a better picture; it seems like there’s always a glare on the label. 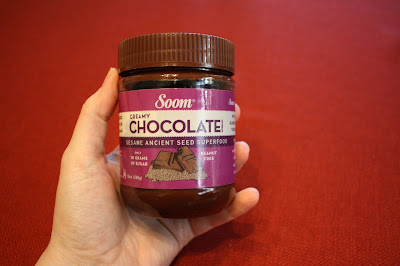 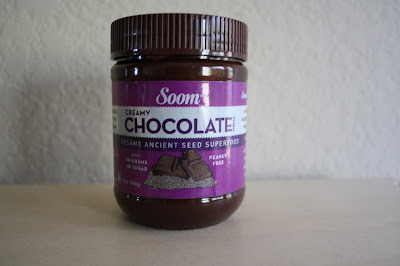 Finally, we ate at Earth Burger two weeks ago. I’d been hearing about this place since the Kickstarter drive (by the co-owner of Green) to have it funded almost two years ago. It opened over a year ago, but we’d never gotten around to eating there! It’s a vegetarian fast-food place that offers burgers (“beef”, “chicken”, and “fish”) as well as fried “chicken” and wraps, and sides including fries, edamame, kale and hummus. But there isn’t any meat anywhere, and I think the only non-vegan item is a slice of cheese. Honestly, I think that if I hadn’t know my burger was vegetarian, I wouldn’t even have guessed. It certainly hit the spot as far as my fast-food craving went! The bun was whole-wheat, and there were some pickled onions along with the lettuce and tomato, and it was just delicious. Prices are comparable to other fast-food chains, and it’s just as convenient (there’s even a drive-through). They also have a coconut soft-serve ice cream that I’d like to try next time I’m there!