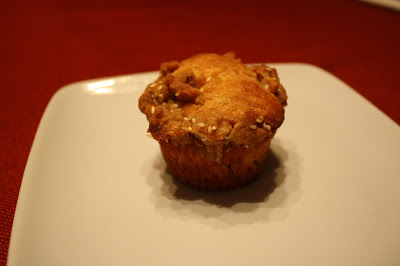 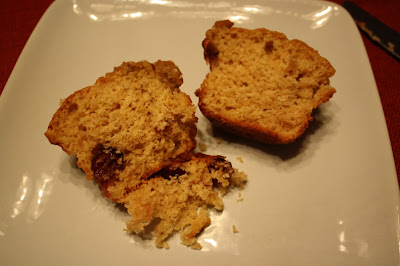 After making white chocolate-cherry-almond cookies, I had finished the package of dried cherries I wanted to use for these muffins from Not Without Salt. But I still had walnuts and sesame seeds to use up, so I decided to use dried cranberries instead of the cherries (I know it’s not the same, but I think this type of muffin can work with various fruits and would be nice with dried apricots, too). I had trouble with the streusel topping, because I think there was too much (vegan) butter in it; at least one other commenter on the original post reports the same problem. I think that’s also what made the bottom of the liners *very* oily, despite the muffins having a dry crumb. I halved the amount in the version below based on other streusel recipes, but I haven’t actually tested it that way. That being said, the muffins were good enough that I’d make them again, with the adjustments below.

To prepare the streusel, mix all the ingredients until combined and break into small and medium clumps. Set aside.

In a small saucepan, combine the dried cherries, water, lemon zest, cinnamon, and nutmeg. Over low heat, bring to a gentle simmer, then remove from the stove and let stand while you prepare the muffin batter. (Alternatively, you can place this all in a small bowl, cover with plastic wrap and microwave for one minute and then let stand.) The cherries will soak up the liquid until very little remains.

Combine the flour, baking powder, baking soda, and salt in a bowl and use a whisk to combine.

In a medium bowl, or in the bowl of a stand mixer fitted with a paddle attachment, cream the butter and sugar until light, about three minutes on medium speed. Scrape down the side of the bowl, then with the machine running on medium low, add the egg. Stop the machine and scrape down the side of the bowl again. Once the egg is combined, add a third of the flour mixture on low speed. With flour streaks still present, add half of the yogurt then repeat until all the flour and yogurt has been added. Stop the machine and stir in the cherry mixture using a rubber spatula, taking care not to over mix.

Using a large spoon, fill the muffin tin with batter ¾ of the way. Scatter the streusel evenly over each muffin. Bake in the middle rack for about 20-25 minutes or until a toothpick inserted comes out with a few crumbs. (The original recipe said 25 minutes, but my muffins were dry, so I’d check earlier next time.) Let cool in the pan for about 5 minutes before transferring to a wire rack to cool until warm enough to bite into. 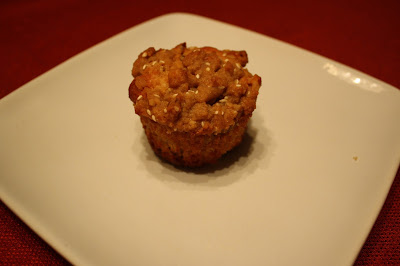 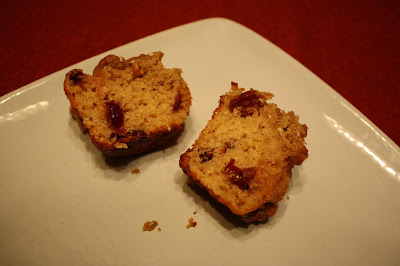