I’m in the process of doing some decluttering, and I came across a stash of old issues of the LCBO’s Food & Drink magazine. I tore out a few recipes before dumping the magazines in the recycling bin, and one of those recipes was this frittata. It was first published in 1993, but this was a reprint from a more recent year (2003, I believe). I made it for dinner, modifying it to be lactose-free and increasing the cheese, and I really liked it. In fact, both the Engineer and I gave it two thumbs up. (Also, the Engineer declared that he loves gruyère, which could explain why he likes some of my quiches and not others – it depends on whether or not I use gruyère.) Sadly, the Little Prince literally gave it a thumbs down, complete with tears, and said “I don’t like it!”, possibly because there’s too much green in it. It’s hidden well enough for my taste, but there’s no fooling him!

In a 10-inch (25-cm) skillet on medium-high heat, heat oil and 1 Tbsp. butter. Add potatoes and sauté until brown and tender, about 8-10 minutes (this took longer for me). Sprinkle with rosemary, season with salt and pepper and reserve. Wipe out skillet.

Meanwhile, wash and stem spinach. Place in a saucepan on medium-high heat. Cover and steam until spinach is tender, about 2 minutes. Place spinach in colander, cool slightly then squeeze out all excess water. Chop. (If your spinach was frozen, then just thaw it and squeeze out excess water.)

Place skillet on medium-low heat and add remaining butter. When melted, add egg mixture. Cook slowly until bottom is set, stirring occasionally, about 10 minutes. The top will be slightly liquid.

Place skillet under preheated broiler and broil until top is just set. Turn out onto serving platter (naturally, there was a slight unmolding accident in my kitchen) and cut in wedges. Garnish with chive flowers, if available. (I wish!) 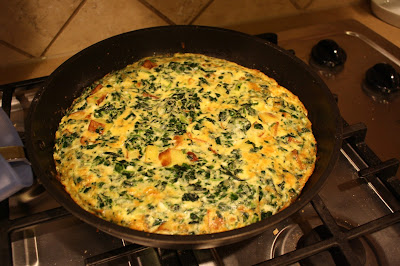 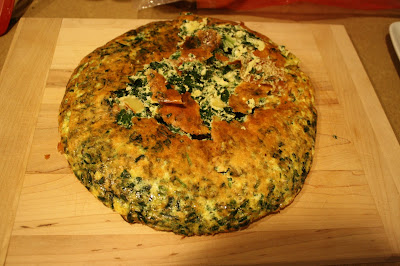 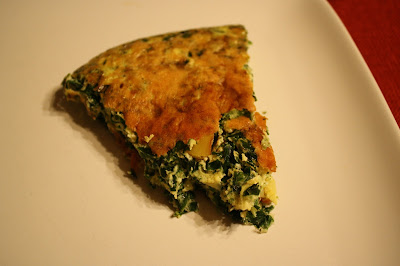